The long-term substitutes at SHS 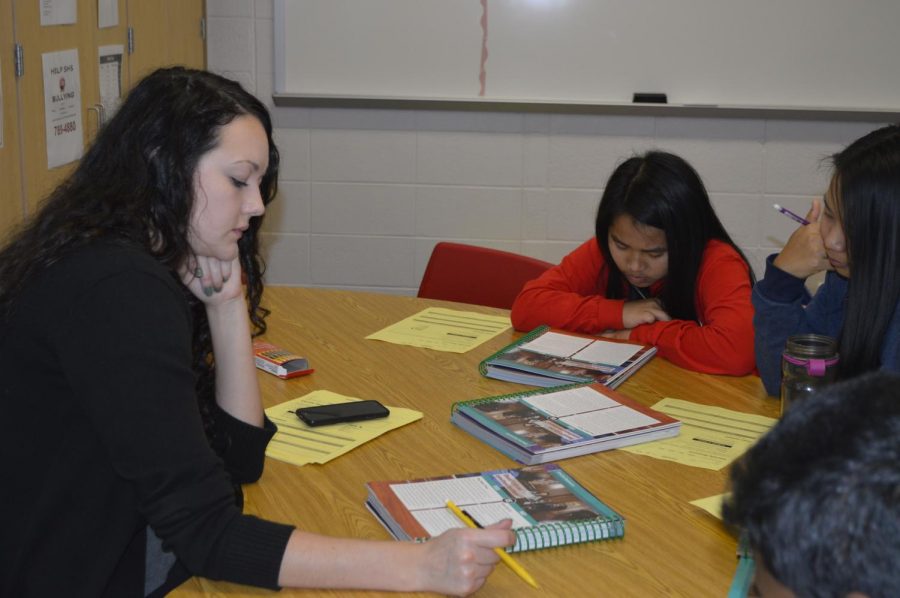 Molly Keller, the current substitute teacher in for Brianna Kompara, is teaching on Nov. 3. She is subbing for Kompara while she is on maternity leave. Keller feels that being a long-term sub is very similar to being a full-time teacher, although she feels students don't think that.

In light of recent events at SHS, there have been a significant number of temporary vacancies in teaching positions. When a teacher takes a day off because they’re sick or have some personal business to attend to, a substitute is brought in to follow the lesson plans laid out by the teacher. But what about when a teacher is out for an extended period of time? A long-term substitute takes his or her place.

“(The students) probably don’t see any purpose in showing as much respect because they think, ‘Well, there is gonna be a finish to this and then we’ll never have to see her again. Even though I am controlling people’s grades (and) I am hanging their destiny over their heads,” said the current long-term substitute for Briana Kompara, Molly Keller.

Keller is covering for Kompara because she is currently out on maternity leave. This is Keller’s first time being a long-term substitute. Last year Keller worked at Perry Meridian High School under an emergency license while a teacher was on a leave of absence.

“They think that Mrs. Kompara is controlling everything behind the scenes,” Keller said. “Like she’s the Oz…that’s not true. That’s not reality.”

Jessica Adragna has been long-term subbing for Megan Woodward´s class, after the tragic accident that took the English teacher’s life. She feels that since she has experience being a long-term substitute she was better prepared to deal with taking over the class.

“This is only my third classroom this semester so it’s been good because I’m able to build relationships with the students and kind of get in a pattern,” Adragna said.

Some of SHS’s long-term substitutes, fill the temporary vacancies at the school to try and earn their teaching license. Adragna has picked SHS to sub at because she herself is a long term sub.

Adragna, who hopes to teach math, says she will be watching for alerts for any vacancies in the math department, but until then she will continue to pursue her license and will continue long-term subbing at the school.

“I 100 percent want a job here,” Adragna said. “I just need a math position available. I joke with Mrs. Blake that I could be here for the next 40 years, but I don’t think she is gonna fall for it.”