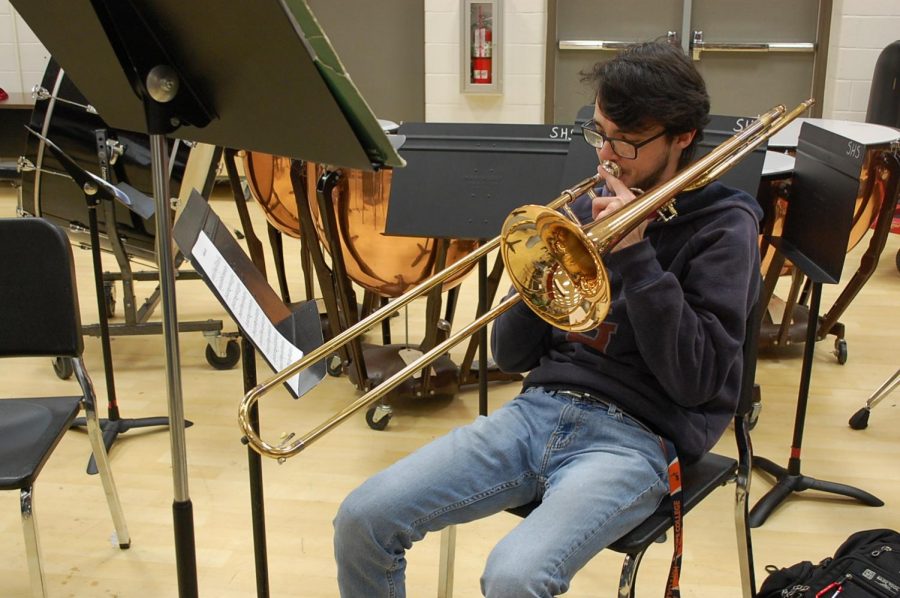 Even though playing six different instruments is not an easy task according to senior Zephaniah McCool, he still loves every second of it.

“(I like playing instruments because) you can be apart of something bigger than yourself,“ McCool said.

McCool plays a total of six instruments: guitar, bass, ukulele, cajon, trombone and the baritone. He plays for not only multiple school bandsl, but his church also.

He says he started playing in the sixth grade and the first one he ever played was the trombone for band class. He picked up the hobby because he says it just seemed very interesting.

At his church, Southport Presbyterian, he usually plays whatever instrument that they need that day which is how he learned to play most instruments.

“Having (music) mixed with what I believe in just makes sense,” McCool said.

He says the hardest part of playing instruments are all of the hours he has to put in. McCool says that he practices four or five times a week for either 30 minutes to an hour each day.

According to band teacher, David Copeland, McCool has been apart of the jazz band, marching band, and also the pep band at SHS.

Copeland has known McCool since his eighth grade year and says that McCool goes above and beyond by taking a music theory class.

“He understands the workings of the music, not just being able to play it,” Copeland said.

McCool has thought about expanding and starting a band, but he doesn’t know if it will go anywhere or not. He says he would want the band include a bass guitar, a cajon and a few acoustic guitars because they sound good live.

McCool says that he does know that he wants to major in worship ministry, which would mean that he would be in a premade band playing instruments, writing songs, recording and performing on Sundays.