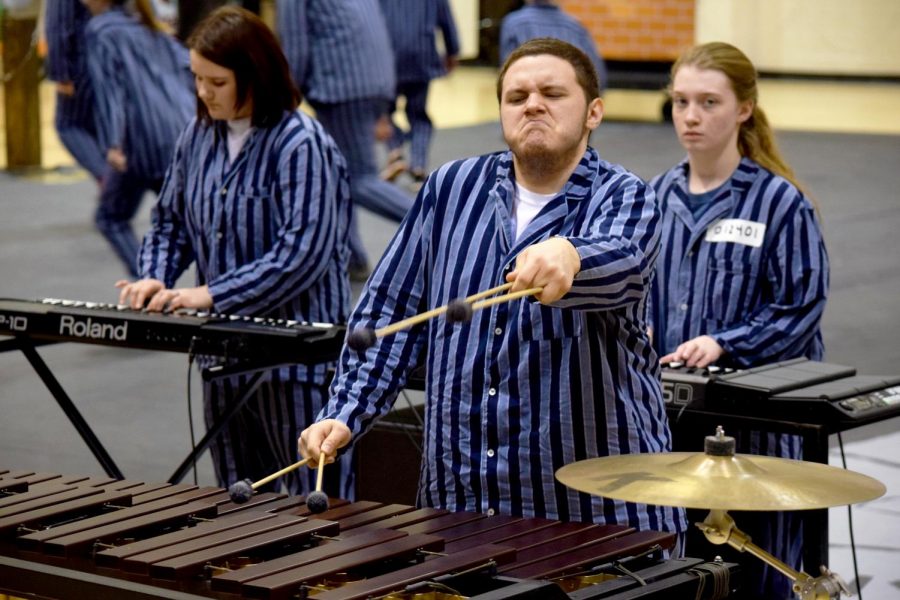 Senior Ignacio Rodriguez acts and plays the marimba during the winter drumline showcase on Friday, March 2.

In the midst of a show set up to look like the notorious concentration camp, Auschwitz, members of the SHS drumline perform music while simulating the lives of victims from the camp. During the show, some members of the drumline wore red armbands to represent the ones the Nazis wore, while the set included a sign above the gates to Auschwitz and tombstones, with just dates, to show the impact of the holocaust. By the end of the show, one of the musicians, portraying a Holocaust victim, ends up escaping. While the SHS drumline sees their show as a remembrance of the event, the International Percussion Association officials thought the show was controversial and unleashed backlash to the drumline and directors.

After hearing IPA’s reactions, the drumline decided to make some changes. They had taken out the Nazi armbands, the sign above the gate that said Auschwitz, the violence, the scene of the prisoner getting dragged and the tombstones. While some IPA judges were offended by the drumline’s show, some judges thought that the show needed to be more dramatic. Along with those changes, SHS drumline director and Southport Middle School band teacher John Radomski and the drumline are currently aiming for a spot that isn’t too uncomfortable for their audience but also relays their message.

Radomski’s main vision for the show was to bring to light the events that occurred during the Holocaust and to honor the victims. Radomski says that his father grew up in Poland during the Russian occupation, and his grandfather had fought against the Nazis. He says that when he received the backlash from officials, he didn’t expect the feedback to be as drastic as it was.

“I knew going into this season that I was doing a controversial topic,” Radomski said. “I knew it might make some people uncomfortable.”

To prepare the group for the challenges awaiting in their show, Radomski had introduced them to historical elements of the Holocaust by showing them videos, bringing in his father to talk with the group and reading them historical facts and quotes about the victims and camps. Radomski says that he wanted to challenge them by getting them to understand that they were doing something bigger than themselves.

“For some of those people I said, ‘you’re gonna give them a voice they didn’t have,’” Radomski said. “For some that did have a voice, I said ‘you’re just raising that voice.”

Along with that, some of the band members took the information provided by Radomski and made it personal for them to enhance their performance, such as junior Erick Mendoza.

Mendoza is apart of the the auxiliary section in  the drumline. When hearing the backlash they had received from IPA officials, Mendoza says that he was upset and infuriated. He also goes on to say that he was taken aback by their reaction.

“I wanted to prove that these changes wouldn’t stop us,” Mendoza said. “We would eventually come back and conduct a striking victory, which we did.”

Mendoza was one of the band members who chose to connect the show to their personal lives. He says he chose to do this because he had family that lived during the Holocaust who witnessed the atrocities. Some members of the drumline members had family members who fought during World War II.

“In part of the show, through the drill that we do, the group comes together and that’s how she can get out, the escapee,” Radomski said. “It’s kind of a story of ‘if we all come together, we can overcome oppression no matter what it may be.’”