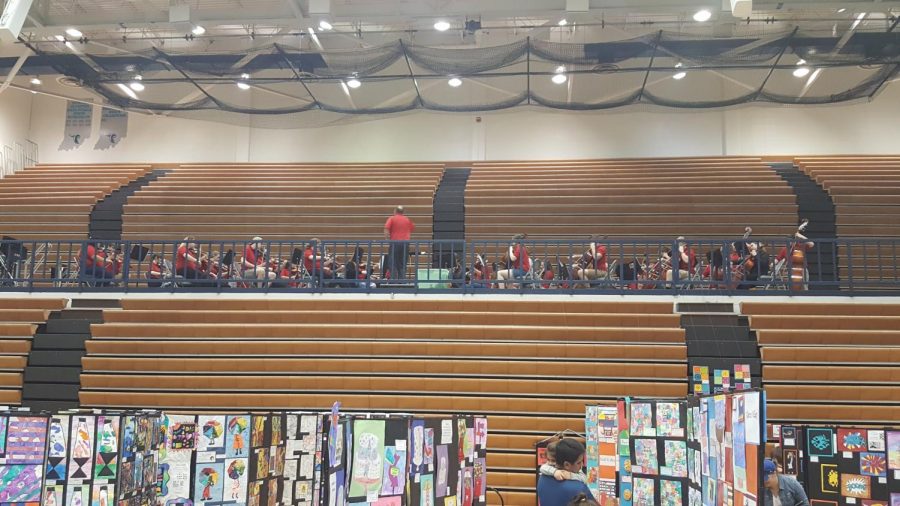 Perry Meridian transformed their gymnasium into a setting for Perry Township’s annual art show last Wednesday and Thursday. While family and friends walked around and looked at the artwork of their peers, another form of art was produced as well, by the SHS orchestra.

Thomas Wright, the orchestra teacher, hopes that his students participating enjoyed playing for the art show because it’s not as much pressure as an orchestra concert, and the music is generally easier to play. According to Wright, the music they played consisted of a three hour playlist with a variety of songs ranging from classical to musical theater songs.

Wright says that the orchestra has played at similar events like this such as the Southport Alumni scholarship banquet and the township retirement dinner. For events like these, the orchestra is not the focus of the event, they just add to the atmosphere and create background music, according to Wright.

Senior Megan Gray has played at the township’s art show since she was a freshman. The show became significant for her because it’s the only time of the year that she gets to play those certain songs and she learned how to play them back in middle school. Gray began playing the first year that Wright had conducted there as well, and every year since then.

¨I´m sad because this is my last (performance),” Gray said.

Wright hopes that the audience can say that the event was a nice experience for them. Wright also says that he hopes that the orchestra’s performance inspires younger kids to want to play music when they’re older.

“I hope that at some point, especially some of the elementary kids who might (have been) there, hear that and go, ‘Oh, one day I want to play in orchestra like that’ or ‘I like that sound’,” Wright said.