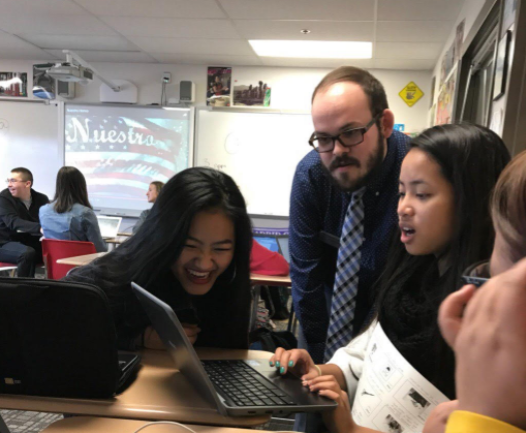 As the past director of the Concurso Académico from Zionsville stepped down from the position, Spanish teacher of only two years, Conner McNeely, volunteered to take on the role.

With the chance to show SHS to the rest of Indiana, McNeely volunteered to take over the responsibilities pertaining to high schools across Indiana.

“I think people just need to know that Southport has an amazing world language program and we have amazing things to offer,” McNeely said.

Knowing that the AATSP (American Association of Teachers of Spanish and Portuguese) needs a place for the annual Concurso Académico, a Spring Spanish contest, McNeely thought to take this first big project of his to SHS next year, showing off the language department and SHS’s facilities. The next event is on April 28 at Zionsville High School. With the approval of Principal Brian Knight, it became official that SHS will put on Concurso Académico in the Spring of 2019 at SHS, only the third time SHS will be involved.

Still, many of the smaller details have to be decided on and finalized. Sophomore Ayessalyn Gutierrez has been helping in spearheading some of this activity. Still, the two alone can not put on the competition without the help of SHS students and teachers, who they need as volunteers. McNeely said that alongside Gutierrez, sophomore Josefina Lechuga is helping with the event as well.

This competition has activities for the students to participate in. These competitions include grammar, non-stop conversation, scrambled sentences, vocabulary, impromptu speaking and a trivia activity called Trivia del Toro. Last year was the first year for students from SHS to attend and they did a “phenomenal” job according to the Perry Township website.

“Our faculty is awesome and our students are amazing,” McNeely said.

One of those students is Gutierrez, who says she is excited for him to be the new director of the Concurso Académico. She does her part by organizing the competition, getting permission slips, and recruiting people to attend the event. She is very excited for McNeely to get this opportunity, and she also feels that they are pretty prepared for the upcoming competition.

“(McNeely) allows anyone to join the Spanish culture, and he is so open minded about everything,” Gutierrez said.

McNeely is so immersed in the Spanish culture that he is on the board of the Indiana Association of Spanish Teachers. This group actually had to approve of him getting the position of Concurso Académico director before it was official. He is also the sponsor of the International Club at SHS. Since teaching at SHS for two years and being involved with the Spanish culture, McNeely has discovered, what he considers, the “amazing world language program” of SHS that he plans to showcase in next year’s Concurso Académico.

“We want everyone to go,” McNeely said. “If you have an interest in Spanish or you’re in Spanish class come with us. If you’re not too confident in your ability that doesn’t matter. Go, participate and see what it’s about.”

If students would like to sign up for the event they can talk to their Spanish teacher or McNeely. Permission slips are due as soon as possible because the next competition is being held on April 28.