The Journal Rewired • May 14, 2018 • https://thejournalrewired.com/12596/entertainment/theater-sophomores-earn-their-spotlight-through-lettering/ 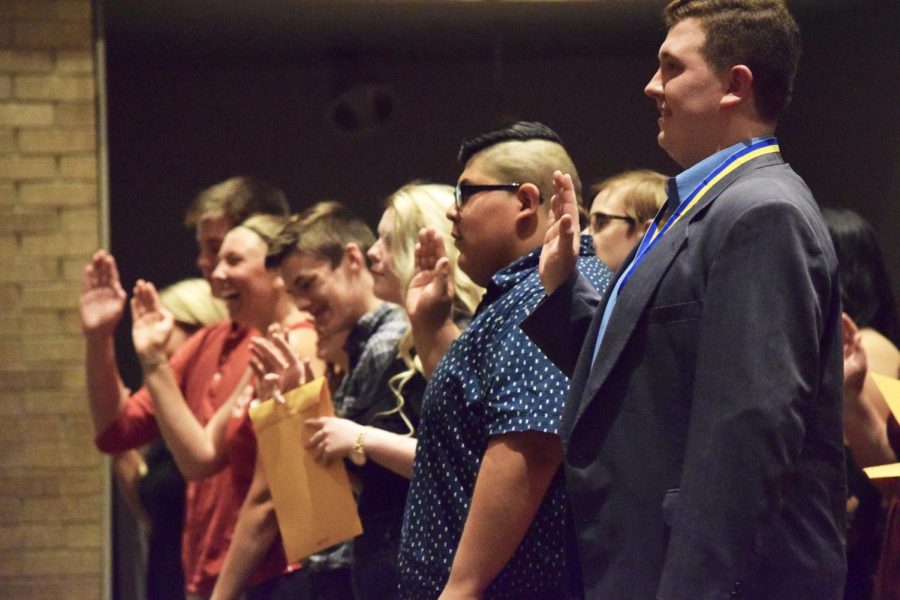 Inductees take the Thespian Society oath at the end of the ceremony on Friday, May 11.

Musicals, spring plays, student directed One Acts and stage crew. All of these and so much more contribute to the road of lettering in theater.

Two sophomores, Gavin Hensley and Jake Warfel, are lettering in theater at the end of this year, opposed to the usual lettering as a junior.

Students letter by gaining points for the International Thespian Society, the honor society for theatrics and fine arts. By partaking in musicals, plays, stage crew, or managing lights and sound, a student can earn points and accumulate them throughout their high school years. According to the society, it takes 10 accumulated points to be inducted into ITS and 40 to letter.

Roberts says that she is very proud of them for lettering so early on, especially since Hensley and Warfel aren’t choir students.

“I’ve got so many crossover choir and drama kids,” Roberts said. “(They) are involved in so many of the productions that we provide technical support for, (they just aren’t able to be a part of the crew because they mainly fill the roles).”

Warfel says that he enjoys theater because he likes being able to perform the lines and seeing them flow into the scene on stage. Warfel´s first breakout into the stage lights happened last year during his freshman year One Acts.

¨I wasn’t doing it for the letter,¨ Warfel said. ¨I was doing it because (I gained) friends and it was fun.¨

Hensley sees himself lettering as another step into his theater career. Hensley´s theater experience varies because he acts on stage and while also learning the technical side of theater. Hensley got to be an assistant director for this year´s spring play, Subtext. Alongside directing, Hensley also managed the sound and lighting for each of the performances.

He believes that it’s difficult for sophomores to letter because they’re new and it takes a while for them to find what they do best in the program and to excel in it.

“It was interesting working with someone completely new halfway through,” Hensley said. “(It’s been) good to be able to put on amazing shows and bond with (Roberts).”

Overall, Warfel and Hensley both plan on continuing their career in theater. The two, alongside many other inductees, are expected to have many more theater opportunities in the years to come, whether it be under the stage lights or behind the scenes.