So much to play for 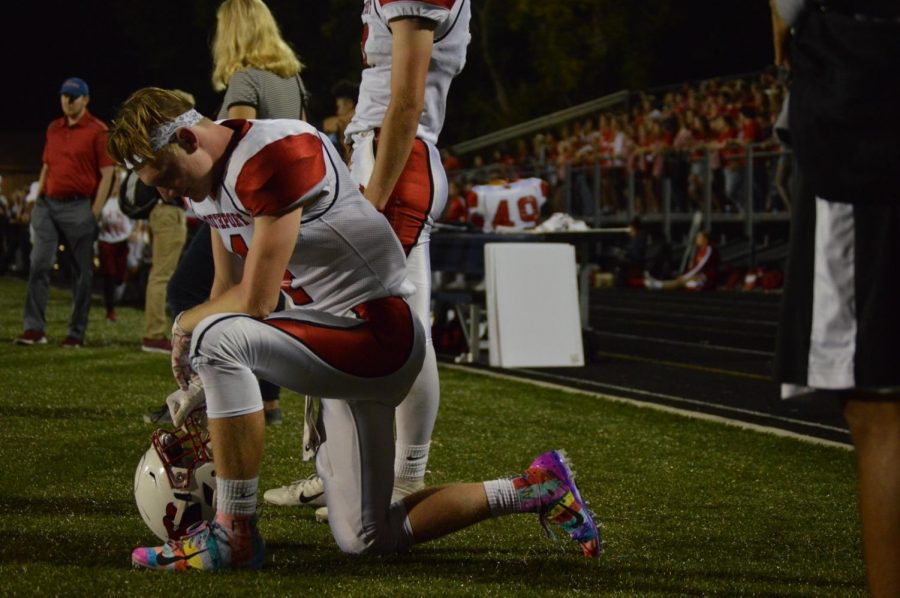 Senior Lucas Willoughby kneels near the end of the SHS vs Perry Meridian game on Aug. 24. This was the first time he wore his customized cleats in a game.

As SHS football players prepare for their games, one of the first things they do is lace up their cleats. These cleats vary in style and color, but one specific pair, on the feet of senior Lucas Willoughby, undoubtedly stands out with multi-colored stripes, writing and drawings. However, these designs are not meaningless. They carry a hefty sentimental value.

The right cleat was designed by two of Willoughby’s cousins, Journey and Charlie Wayman, whose names are written on the inner side along with the initials PAN. On the heel of this cleat, hidden in a glossy purple, is the birth and death date of a lost loved one.

The left cleat was designed by an eight-year-old girl named Avery whose name is written on the inner side, just below the Nike swoosh. The initials JKL also stand out on the inner side of this cleat. The heel shows yet another birth and death date of another lost loved one.

“When I was younger and she was sick, all I wanted to do is take care of her. I told her that whenever I got older, I would have taken care of her. Put her in a house, buy her a car, all of that stuff,” Willoughby said. “Then, whenever she passed away, I kept the motivation even though I knew I wouldn’t be able to do anything for her.”

Willoughby hasn’t had the easiest road. CF has been a constant factor in his life. There are some things that have happened in his past that give him motivation to be successful on the field. One of them is his mother’s death.

away at the young age of 31. It is her birth and death date and initials that are on the left cleat.

At 21, she had Willoughby, but was in and out of hospitals during his childhood. Willoughby says that he was too young to know what was going on and too naive to realize that her time was close. She fought

and fought against CF until it became too much for her. Jessica died on Nov. 26, 2011, when Willoughby was just in the fifth grade. In commemoration, Willoughby has a tattoo on his left bicep which is a rose with Kati’s birthdate in Roman numerals.

“After it happened, it was just like ‘wow.’ I didn’t get to tell her I loved her every da

y and just be a better son,” Willoughby said. “All those things that you think about when someone passes away and you’re like ‘I should’ve done this for them.’”

According to cff.org, CF is a progressive, genetic disease that causes persistent lung infections and limits the ability to breathe over time. Symptoms of CF includes persistent coughing, poor growth and

The Cystic Fibrosis Foundation sponsors the Great Strides walk in many locations throughout the nation. In 2014, senior Anna Kendrick, older sister of Avery, and Willoughby walked into each other’s lives. While going to

ol, they knew about one another but never talked until this day. According to Anna, she noticed him, walked up to him and started having a conversation. This is where the close relationship between Anna and Willoughby started, and how Willoughby was introduced to Avery.

“Every time he comes over, Avery loves Lucas and doesn’t get off of him,” Anna said. “I used to have to yell at her to get her to stay away from him.”

However close Willoughby and Avery may be today, their relationship did not start off this way. The two took some time to warm up to each other, but once they did, they never looked back.

Willoughby says that the two always play games together like tag, and just do stuff that little kids do. Their time spent together has allowed Willoughby to see fight in Avery, the same fight his moth

“She’s a strong little girl,” Willoughby said. “Not many young people have to go through the things she has to go through.”

While there is no official cure for CF, there are many treatments that could mark the beginning of the end for CF. According to Anna, a treatment that Avery does is one with a vest that shakes and vibrates. The shaking and vibration diminishes the amount of mucus build up in her lungs.

Avery wears this vest 30 minutes a day, twice a day and does breathing treatments where

medicines are inhaled through a mask. She also has to take four different types of pills every time she eats and has to take vitamins every morning.

“(Life with CF) is basically a normal

kid just having to do treatments every single day,” Avery said.

The cost of living with CF varies for which treatments

are done. In Avery’s case, the medicines that she takes cost anywhere between $100-$3,000 and the machine and vest cost around $15,000. To be able to afford this, Anna and her family design and sell t-shirts that can be seen worn around the Southport community and take in donations from their friends and family. For the past four years, Willoughby has been a part of selling the shirts and doing what he can to help the Kendricks.

Along with CF being a constant factor in his life, Willoughby has also faced other hardships that motivate him to play.

April 18, 2018 is a date that Willoughby will never be able to forget. This is the date that Willoughby lost his grandfather, Paul Arthur Neuner. Paul died at the age of 79 after battling two forms of cancer for 12 years. The first form was prostate cancer. At 67, Paul had it removed and started radiation therapy. The scarring from the radiation eventually led to him having bladder cancer which took his life.

All in all, Willoughby’s cleats represen

t something greater than just sharpie marks on a pair of shoes. The designs, symbols and colors on them are the motivation for why Willoughby plays.

“My grandpa, my mom, my cousins, all of it means something to me,” Willoughby said.