Discover how SHS students use their musical passion to inspire others 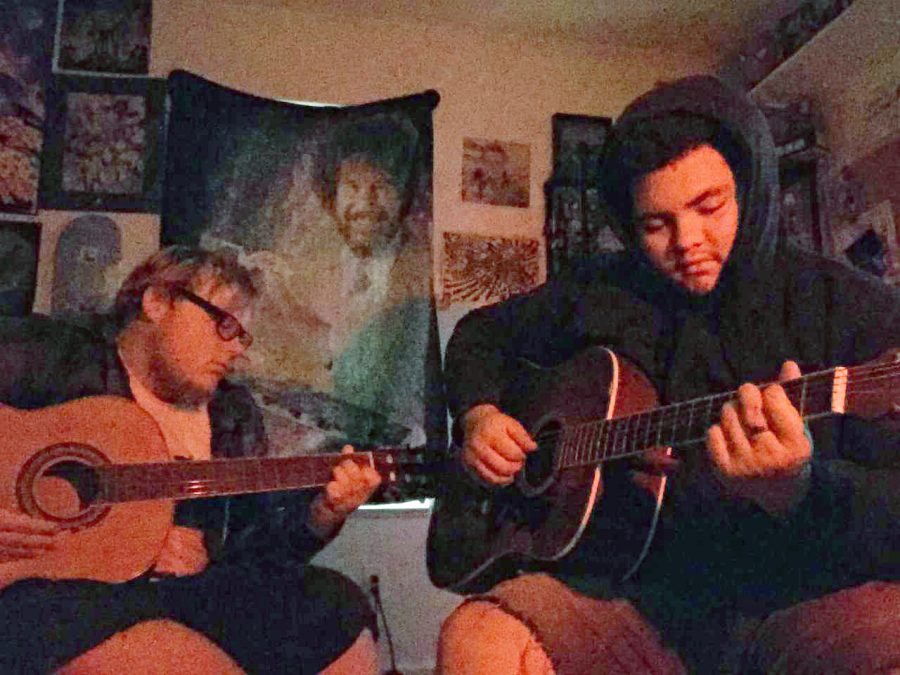 Scott Newton (left) and Denis Shrum sit together and play their music. Newton and Shrum enjoy inspiring others with their lyrics.

As I listen to you breathe, I drift off into your heart,” it says in the song “Fluorescent Night” by The Troubadours.
The Troubadours, a band created by sophomores Denis Shrum and Scott Newton, was made to bring happiness to others through music.
The two band mates, Shrum and Newton, have been friends since sixth grade, but their friendship grew stronger when they started to create music together. At first the group didn’t know that they wanted to start making music, but they were passionate about music, so making it came naturally.
The band first started two years ago when Shrum called Newton saying he wrote a song and they should put it together. And that’s the moment when their journey started.
The band has already posted a few songs on SoundCloud, and they also post sneak peeks of their future music on Instagram. Currently, they are trying different things, like adding somewhat of a rock vibe mixed with some folk to make it new.
“We make a little bit of everything,” Shrum said.
In the band, Shrum is the singer and lead guitarist and Newton is the bassist. Both of them can play several instruments like the guitar or the piano.
The group also writes their own lyrics for their songs. When Shrum writes, he thinks about ways how people can connect with their music, but he also writes the music at a personal level, saying that if he likes it, there’s bound to be someone who likes it, too.
“I want to give a quick escape for someone,” Shrum said.
Newton often writes about the emotions he is feeling and what’s happening in his life at that moment.
“It makes me a bit emotional, depending on what we are writing about,” Newton said.
Not only do The Troubadours want to make music that is meaningful to others, they want to make something that is special to themselves as well.
Newton’s parents said that The Troubadours’ music makes them feel good, and it always takes them somewhere else. But the idea of giving people joy is the most important thing because they want to allow others to feel inspired through their music.
Their overall dream, though, is to go big with their music, together or apart, because they know that they will still be there for each other no matter what happens.
“The music makes us happy,” Shrum said. “We get a chance to express ourselves in different ways.”