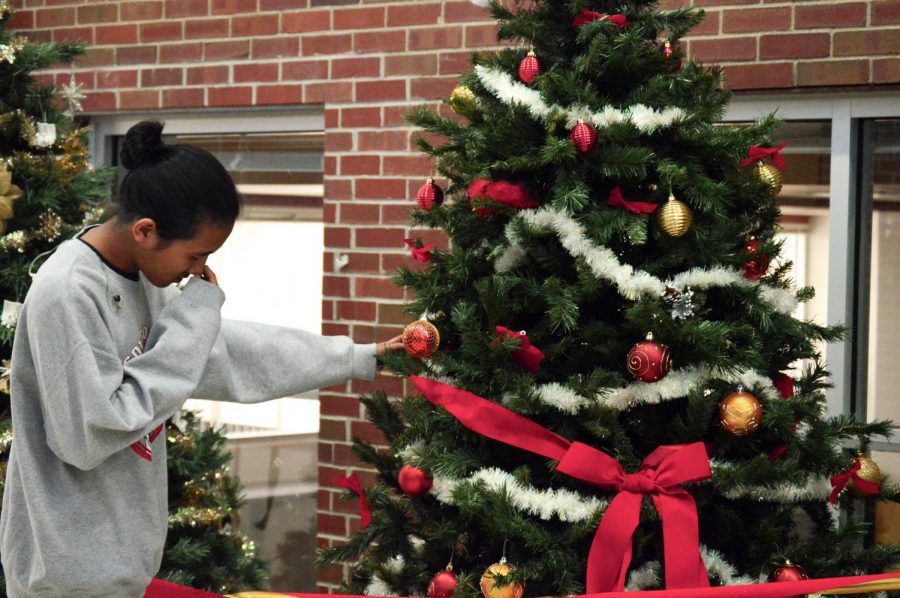 Senior John Cheerity mourns the Christmas past in the main hallway on Dec. 18.

Walking through a crowded mall in the middle of December, Nichola Joy is overwhelmed with the sheer amount of deals, promotions and sales seeping out of the surrounding stores.
People screamed things like “50 percent off for the rest of December” or “Buy two, get three free.” To Joy, these sounded like wonderful deals, all created to make consumers’ Christmases better and more affordable. In reality, corporations are using what they call “the most profitable time of the year” to bring in as much money as possible.

“They have no regards to our feelings or personal lives,” Joy said.

When Joy later returned home, after a long day of shopping, she became disgusted as her favorite show, “Christmas Spirit for the Soul,” was interrupted by thousands advertisements. “I was horrified,” Joy said. “My Christmas spirit is leaving me as we speak.”

“Has everyone fallen under the shopping spell?” Joy said. “Do corporations even care that the only thing on my son’s Christmas list is a discount to Game Start?”

As consumers are slowly feeling the effects of the abundance of promotions, corporations are gaining exactly what they wanted: profit.

“They are practically ripping the money out of consumers’ pockets,” Joy said.

One well-known businessman, Ivan Voleur, is said to have gone door-to-door during the holiday season asking families for up to 50 percent of their income, promising a punch card to their favorite store in return.

“I do it because it’s my job,” Voleur said. “People need to respect that I have feelings too, including the satisfaction of a wallet full of money.”

Patty Cane, a mother of four and Christmas enthusiast, claims to not have realized that this problem was taking place. She claims to have had a wonderful December so far, including a wonderful family dinner (three courses, including half a can of green beans and three pieces of ham, which she claims to have gotten at 60 percent off) and family activities, such as shopping or extreme couponing.

Cane does admit that her shopping tendencies have gotten worse over the past few weeks, but she refuses to believe there’s anything wrong with that. She says that it is just too tempting to resist, with everything either on sale or involved in a two-for-one sort of deal. Cane claims to not have had trouble with convincing businessmen.

“I thought it was normal to see corporation CEOs yelling at you in your dreams while you sleep,” Cane said.

In Santaville, Iowa, one of the most important Christmas traditions is the lighting of the 300 feet Christmas tree on Dec. 1. This year, however, the tree lighting was cancelled. Reportedly, a big business called MoneyMakers bought the tree and the lights to sell for profit. The CEO of MoneyMakers, Chris Cash, claims to not feel bad about ruining Christmas for hundreds of people, as long as he reaches his profit goal.

“The lights were a distraction anyway,” Cash said. “All I know is, my business might be able to open up a new location this year.”

Big business problems have even extended to the North Pole. Santa Claus’ workshop was bought out by Winter Wonders, an organization that charges $60 a person to sit on Santa’s lap. With an improved location, Winter Wonders’ profit has increased by 85 percent.

As a result of the profit-driven Christmas “spirit” from big businesses, consumers’ joy for the holidays has gone down by 80 percent, according to a poll from the Dew Research Center. Christmas has become less family-driven and more focused on the shopping and bargain aspects of the holiday.

“It’s the most profitable time of the year,” Voleur said.