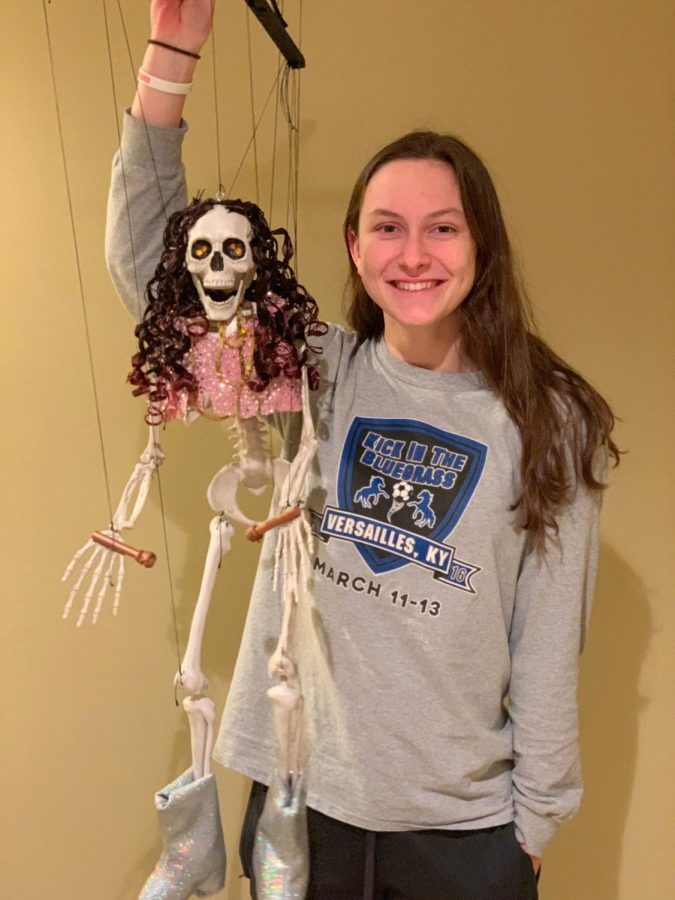 Senior Jordan Cox poses with one of the puppets that is used in performances at Peewinkle's Puppet Studio. Cox personally hand-made the puppet shown.

When thinking of a typical part time job that high school students usually acquire, jobs that have to do with dropping fries in a fryer at a fast food restaurant or bagging groceries at a grocery store are usually not seen as too far fetched from what is typically viewed as a “normal” and “common” job for a high school student.

However senior Jordan Cox takes part in a job that is completely different than your average fast food joint or grocery store.

Cox spends her time working at Peewinkle’s Puppet Studio in the Indiana State Museum where she helps put on puppet shows for anyone to see.

“I love doing it,” Cox said. “I feel like people judge me for it because it’s puppets and that’s just something that you don’t hear often, but I love doing it and I don’t care what other people think.”

While Cox herself does not perform in the puppet shows too often, she still has several responsibilities that she takes on at the studio.

According to Cox, her part at the studio mostly consists of her doing backstage things, such as lights, but she also has to handle the front desk and the box office on the days of performances. Cox also helps make and put together the puppets for the studio to use since the puppets used in the performances at Peewinkle’s, are their own.

Cox says that she views the puppet studio as a place to get away and as a stress reliever from things that happen in her life and at school. Cox loves being at the studio primarily because the way she feels at the puppet studio contrasts with the way she feels when taking part in other activities that she is involved in, such as swimming and soccer.

“With soccer, I go and go. I’ll be there and I am there, but soccer has like its own problems in itself,” Cox said. “There’s drama just like there is in really anything that you do, but there is no drama at the puppet studio.”

The Peewinkle’s Puppet Studio has been a big part of Cox’s life since she was two-years-old, as her and her family would frequently go to the studio to see shows, and since then, her passion and love for the studio grew.

It is because of this passion, that Cox now wants to open a puppet studio of her own in the future, as she loves more of the managing behind owning a business rather than actually performing in the shows.

According to Cox, she wants to open up her own puppet studio with one of her friends who works and performs at the studio alongside her, Parker Rottman.

“Parker does a lot more performing than I do,” Cox said. “So he would be a performer and I would be backstage doing more of the business and technical stuff.”

Rottman has been going to the studio since he was seven and he says that Cox is a great, hard worker and he loves working with her.

“Jordan and I have had many discussions about opening a studio,” Rottmann said. “We make a great team and I can’t see her not being a part of my life. We both agree that we want to go bigger, meaning more theatrical and complex shows in the future.”

Although Cox would love to follow through with owning and managing her own puppet studio alongside Rottman, she is still unsure of what exactly she is going to do in the future. However, one thing Cox is sure of, is that she absolutely wants her passion of puppets to still be a major part of her life.

“I love doing it, I’ve always loved doing it and I don’t know why,” Cox said. “I’m always scared that someone is going to ask me, “what makes you go back?” because I can never tell because I just don’t know. There’s just something there that makes me go back all the time.”