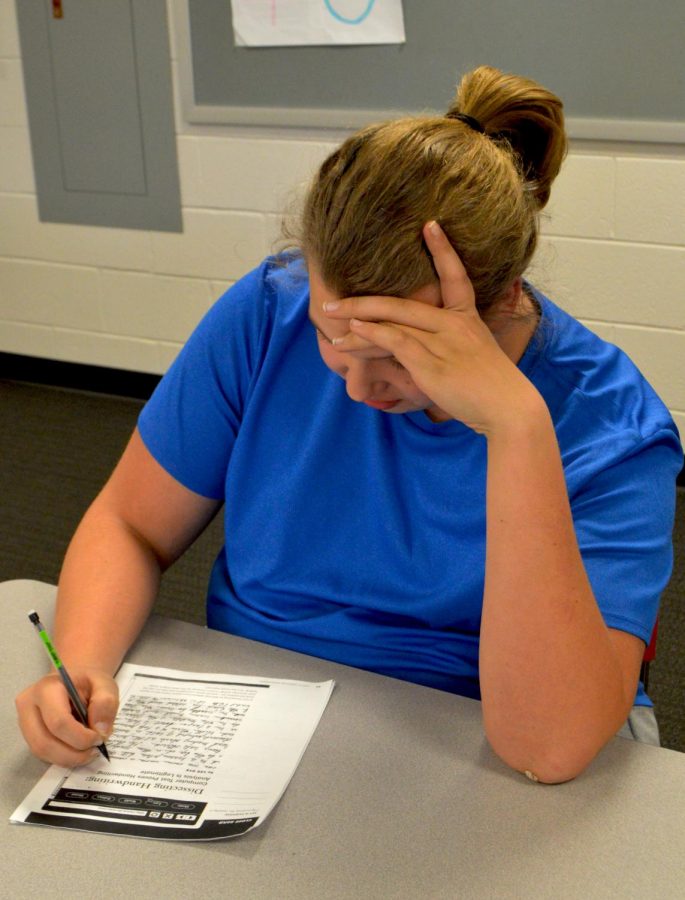 Junior Tom Stukkagan works on a pre-written exam provided by College Board as part of the student pilot program.

“We did it for the kids,” said CEO David Coleman of the College Board, from his $1.2 million yacht anchored just off the coast of Barbados. “They need to be able to adapt to the real world, and this new initiative will do just that. We’re preparing these kids for college, not preschool, so we should stop treating them otherwise.”

College Board officials announced that they will implement a new initiative going into the 2019-2020 school year. This initiative will introduce a large AP course fee and the introduction of a payment plan. The course fee is projected to be upwards of $840 to $1260 depending on the course being taken.

According to Chief of Global Policy Stefanie Sanford of College Board, the initiative is to “promote accountability for AP students and create a sense of responsibility.”

“This initiative should have been expected,” Sanford said. “Students have wanted us to mimic the real world with our official AP curriculum for a long time. In cooperation with our affiliated schools, we held multiple meetings with educators and students over the course of the past six months to see how we could truly simulate the real world experience of college academic life.”

Students, such as Junior Wana Degree, are embracing the new change.

“We may not really understand why they did it,” Degree said, “but I talked to my sister who goes to that big school downtown, and she said that she’s in debt and also living off of ramen as a ‘broke college student.’ So realistically, they really are trying to prepare us for the real world, right?”

As part of the initiative, students like Degree are required to sustain themselves on only ramen and water with the occasional apple. College Board certified health professionals found this diet to be adequate for students.

Economist Iam Gottmoni of the Wall Street Diary stated in his most recent report that this “power move” has been the most effective ever done by an educational corporation.

“It’s incredibly smart,” Gottmoni said. “Their profits are going up exponentially. There is no counterargument to this being a good thing for the economy and for students alike. They’re going to learn how the world actually works and the market goes up a couple points! Win-win!”

Stan Tistinmeijer of Totally-Not-College-Board-Affiliated Newt Research Center projects that students will run at peak efficiency in the 2019-2020 school year and that there should be a rise in high exam scores.

“These kids are going to be the best of the best,” Tistinmeijer said. ”By running on coffee and day-old ramen, they’re going to understand what it really means to be a college student. Educators are going to recognize this and should notice a rise in both productivity and classroom engagement, especially if they were to offer food-based rewards. Schools offering AP courses should expect to become AP Distinguished if they enforce this new policy strictly.”