A student and his biggest enemy: time 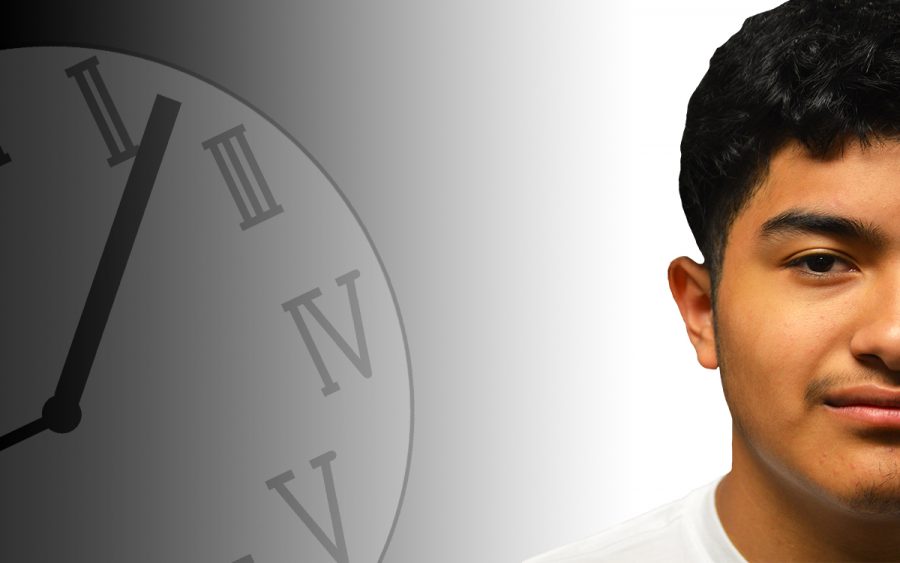 Student Al Wayslate faces his foe, time, as the days draw closer to each and every deadline.

Missed buses. Missed counselor appointments. Missed bathroom opportunities that have led to catastrophic outcomes and slippery situations. These are the follies of failing to meet deadlines that senior Al Wayslate struggles with regularly.

“There hasn’t been a time when I haven’t been late or completely missed the schedule for something important,” Wayslate said. “I just wish I could figure out why.”

Here, at SHS, Wayslate says that he is going on a mission to find the reason as to why he can’t meet deadlines or get to places on time. His journey involves acknowledging the issue and seeking out help from his guidance counselor.

“Look, I know I have a problem with my perpetually present lateness, but I want to find the solution,” Wayslate said. “I don’t want to feel like a victim of myself anymore.”

Wayslate says that he has accomplished his first goal and even set a “deadline” of his own to get better at meeting deadlines. However, he missed his own, rationalizing that he is still okay because there will be plenty of future chances to try again.

After missing his own deadline, Wayslate went on to see guidance counselor Thomas Goodtimes. Wayslate says that Goodtimes didn’t help at all, not even showing him the error of his ways. He says that Goodtimes handed him a list of times he was late to passing periods and to class, as well as an additional list with all his assignments marked with a late status. Wayslate mentions that Goodtimes refused to reassure him with the obligatory sympathies such as “he wasn’t a victim” or “things will be all right.”

“I am sorry to say this, but Goodtimes only gave me bad times,” Wayslate said. “I mean, what do even more papers do to benefit me?”
Wayslate says that he accepted the sheets of paper and reflected on them three days later when he got around to skimming them over. He believes that these papers serve no purpose and only misguided his search for an answer.

Goodtimes, however, believes his meeting with Wayslate was a good attempt to show him how obvious his problem is and how easily it could be corrected if he took the time to genuinely self-evaluate.

“I mean, his tardiness is a painfully obvious and easy to fix problem,” Goodtimes said. “Sometimes I just wonder if he thinks I am the one who is stupid.”

After the visit with his counselor, Wayslate decided to reflect on many of past times he was late to passing periods, class or to turn in assignments. He says that he doesn’t see what’s truly wrong, even though he’s never achieved anything on time because he always has a reason for it.

“One day it’s gum stuck to soles of the sneakers, and another day I am suing clockmakers,” Wayslate said. “That is why I am late. Besides, it’s not like I can help that these deadlines and priorities are inconveniently timed.”

With his journey coming to a close and search results inconclusive, Wayslate believes that there may never be hope for him and his struggle against his biggest adversaries: the clock and the calendar.

Wayslate goes on to say that he has now tried everything in his power to cure this chronic condition, and if he is ever confronted by his counselor about his tardiness, then he’ll have a logical reason in that “I’ve tried anything and everything.”

“It’s almost like being on time is exclusive to responsible people,” Wayslate said. “Maybe I can find one who can tell me about how to solve my problem!”

Wayslate says that in the near future, SHS is going to host a festival with fortune tellers that tell students what direction to take next in terms of post-secondary education. He hopes that by seeking out one of those fortune tellers, he’ll finally know how to resolve his issue.

“I mean, I have never had a reason to not trust a fortune teller with imperative life happenings before,” Wayslate said. “I think they are generally good for revealing more than the truth, so I’ll give it a shot.”