Students' love for English goes beyond the classroom 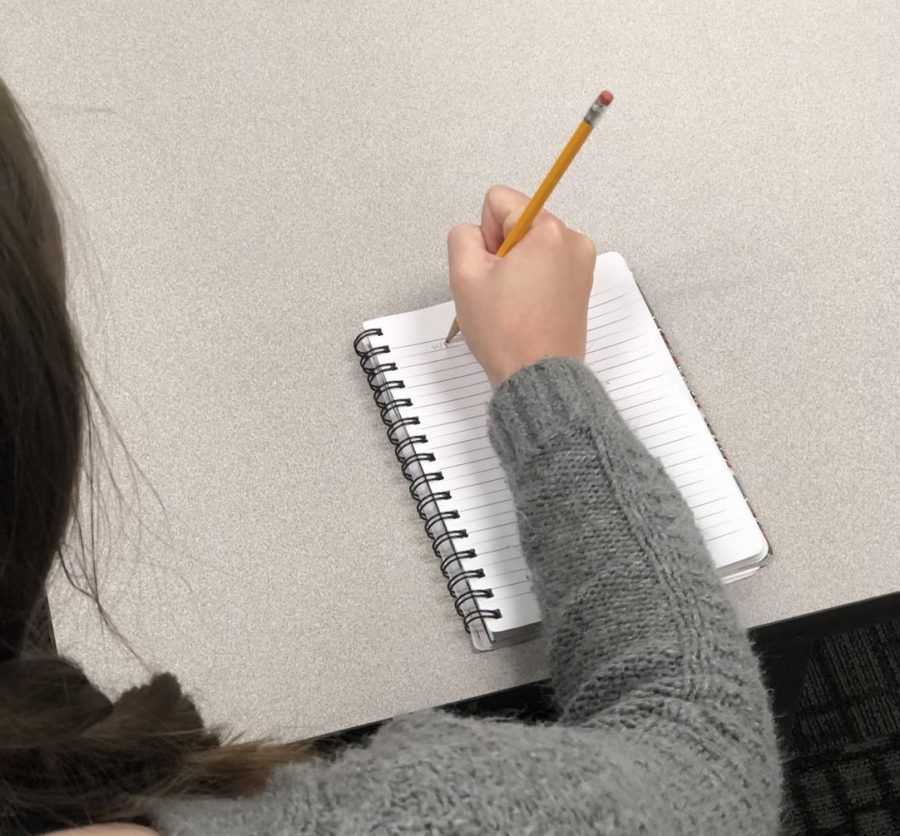 Some English students at SHS dabble in writing outside of school.

Writing in this way is the same for some students at SHS. Not only do they enjoy writing inside of school for their English classes, some students write on their own time.

Senior Abagail Cure mostly writes short stories. Occasionally she attempts to write books, but says she finds it difficult to deal with writer’s block and motivation to write. Cure likes to write fiction, action and romance.

“If I’m feeling a certain emotion, it’s easier to write it out on paper and see that for myself rather than thinking about it,” Cure said. “So in a way it’s like a coping mechanism, and also it lets my imagination get out, because I’m not the best (artist) or anything like that.”

When writing, Cure says she tends to begin with a random idea, whether she got it from a dream or some random fountain of inspiration. Her stories tend to be based on her emotions. If she feels upset about something, the story can tend to be more hopeful. Overall, she lets her imagination run wild, as her stories never have any specific topic.

She began dabbling in writing in middle school, and her efforts have bloomed from there. Cure feels during her freshman and sophomore years, though, is when she really got into creative writing. As for the future, she hopes to go into something English related due to the impact it has had on her thus far.

Similar to Cure, senior Hannah Sorrel began writing in middle school. She writes fantasy stories, and has a book in the making. It’s about two girls with magic powers, and they go on adventures to find their parents and learn about their powers. She’s about halfway through with the book.

“[Something I struggle with is] getting into the mindset of writing and not like writing a short story,” Sorrel said. “Like actually writing a plot and going through with it because sometimes I’ll just be like ‘Oh, I want to write this idea but wait, I need to work on this scene that I’m on.’”

Former SHS student, senior Adryonna Reffett, who now attends Decatur Central High School, has actually finished a book that is currently in the editing stage. Reffett says it tends to be time consuming, but she enjoys it a lot. She’s written stories about fantasy, horror and trauma. Although Reffett enjoys writing, she says she often struggles with motivation and getting her words down. Reffett writes mostly because she always has. After she learned to write, she’s always enjoyed it.

“I’ve learned that you can’t depend on inspiration to write,” Reffett said. “Inspiration is very, very fleeting. It will disappear. So you have to make it into a habit, and you have to make yourself write when you don’t want to, or when you have no idea what to write, or whatever you’re working on will probably never be finished.”

For Reffett, writing has given her an outlet and helps her create things she enjoys. She hopes to publish the book that she’s written, and while she hopes to write professionally, she feels it would likely not be successful. Nevertheless, she plans on continuing to write, regardless of if she is successful or not.

English teacher Timothy Jamriska says his freshmen have grown since the beginning of the school year. During class they write what he calls “flash fictions,” during which they study a term, read a story on it and then write their own thousand word story utilizing the term they studied, be it symbolism, tone, or anything of the sort. For aspiring authors, Jamriska’s advice is to just practice and practice.