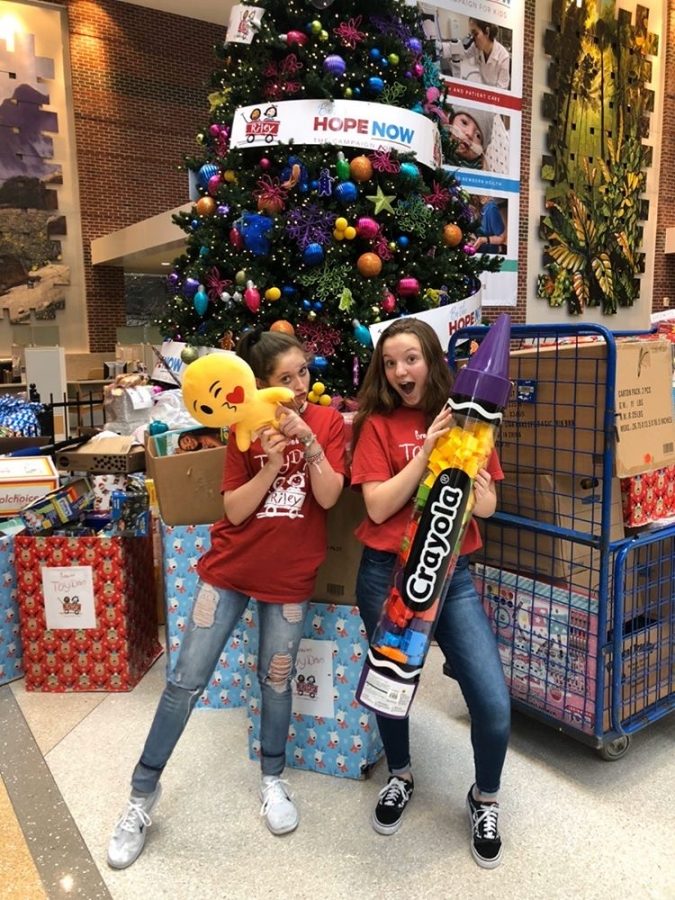 Gracie Bennett (left) and sophomore Ellie Brown pose with some of the donated toys at Riley Hospital. Gracie's goal is 15,000 toys.

At the age of three, Gracie Bennett was placed at Riley Hospital because of a brain tumor that had only been known to be found in middle-aged men. From there, she would go through countless surgeries.

After two years of undergoing procedures, she started to see a need for joy around Christmas time for kids and parents going through similar experiences. Gracie is 13 years old now.

“I just wanted to give back to the kids,” Gracie said. “I know there are kids that are going through the same thing as me or something similar, but they don’t want to be alone during Christmas, and they want to know if there is somebody else out there that has gone through something similar.”

SHS participated in Gracie’s Toy Drive this year, giving students and staff the opportunity to provide gifts to hospitalized children and contribute towards Gracie’s goal of 15,000 toys. The toy drive ran from Dec. 2 to Dec. 13. In addition to being posted around the community, at businesses and other schools, boxes were also placed in iPass classes in order to allow students to be able to easily donate. Tomorrow, the donation boxes will be taken and placed on a truck to deliver the toys to Riley Hospital, where they are then distributed to the kids. Most toys were accepted with the exception of handmade items.

“She knew what it was like to not have a normal Christmas while being in the hospital,” sophomore Ellie Brown, a SHS representative to help collect toys, said. “So it gives kids the opportunity to have presents on Christmas like normal kids.”

Last year, SHS gave over 1,000 toys. Brown says she remembers the big trucks pulling into her mom’s place of work, the Indiana Connections Academy, and seeing Gracie’s face light up after viewing all the donations from around the community. Now, as of this year, more schools are involved, such as Westfield High School and Danville North and South elementary schools.
Sophomore Emma Meredith has gotten involved with the toy drive because of Brown, her close friend. This is her second year doing the toy drive, and she plans on continuing through high school.

“It’s a really great opportunity to connect with others, and I also have learned a lot about Riley and their story and also Gracie’s story, and I have made really good friends,” Meredith said.

The goal of this year was the same as last year: 1,000 toys. The goal for each iPass class was 10 toys in hopes of reaching the goal. Then, the toys will contribute to Gracie’s overall goal, which is 15,000.

Math teacher Ethan Coffman oversees the toy drive, and he believes the drive is a great way to get students involved in helping others.

“Our ultimate goal, whether students believe it or not, is that we’re trying to get a culture where doing things are a priority and not talking about things,” Coffman said. “Let’s not talk about doing things, let’s actually do them.”