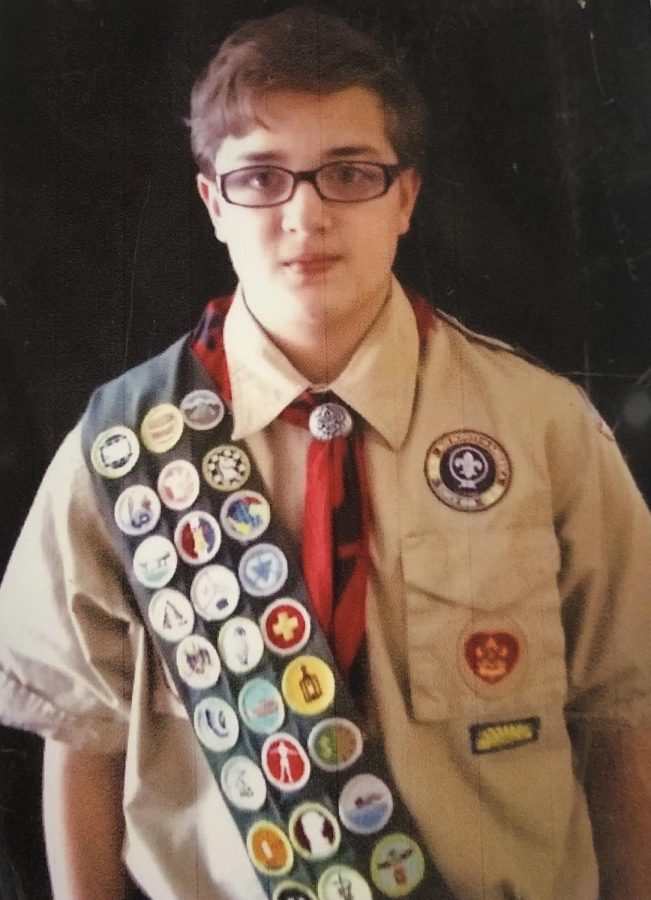 As a 3 year old inspired by his brother, sophomore Jonathon Craddock was ready to spread his wings.

Following in his brother Samuell Elder’s footsteps, he enrolled in Cub Scouts. After reaching the age of 11 and advancing up to Boy Scouts, Jonathon was certain he wanted to earn his Eagle Scout, the highest rank. He felt that by continuing to increase in rank, he would grow more through the experience.

“I believe the purpose of Boy Scouts is to teach young men to help other people and to make sure they’re always prepared,” Craddock said.

Craddock began his journey by earning his merit badges. In order to receive these, there were certain tasks he had to complete, such as camping, first aid and swimming. As he collects merit badges, his rank in Boy Scouts increases too.

The seven ranks are Scout, Tenderfoot, Second Class, First Class, Star, Life and Eagle. Each rank provides lifelong skills to young boys, and as they increase, the skills become more challenging. According to Scouting Magazine,Tenderfoot teaches first aid and self-reliance. As the scouts begin to progress to ranks such as Star and Life, they have to complete several hours of community service and display leadership skills.

Craddock says that these tasks were challenging, but there were some that he will remember forever. Camping and cooking were some of his favorites. He also decided to take theater, which wasn’t required. Ever since he was little, he sewed costumes for himself and took an interest in the performing arts.

Earning his swimming merit badge was one of Craddock’s highlights in his Boy Scout journey. He had to dive to the bottom of a pool and retrieve a rock. Craddock says it was scary for him, but he was proud when he made it to the surface. His mother, Jill Craddock, recalls him having a fear of water since he was little, but she was proud to see him face it head on.

“It was fun to watch him grow from my little kid to my big scout,” Jill said.

After earning the majority of his merit badges, Craddock and his family moved to Indiana. By then, he was ready to begin a special project that would earn him his Eagle Scout. This project would prove his growth as a Boy Scout and a leader. He had to organize an event to help a cause he was passionate about and that aids the community. Craddock already knew what he was going to organize since he was a young boy.

“Since I was little, I always wanted to give back to the pet community, and I feel the best way to do that was to help out my local shelter,” Craddock said.

He then began his planning process. His goal was to organize a pet service day at his church. Dogs would be put up for adoption, and people could bring in their pets to receive free rabies shots. Also, he wanted to make dog beds to donate to his local shelter, Tails and Trails.

English teacher Sara Berghoff has had Craddock as a student since his freshman year. She says she always believed he had potential.

“He’s always been full of energy and ideas, and as a sophomore he is using them to take action,” Berghoff said.

Budgeting was a task Craddock had to sort out on his own. He estimated that he would need about $800 to cover the costs of materials for the beds and the rabies shots.

In order to accomplish this, Craddock asked Home Depot, his church, family and other local pet stores for donations. Then, after getting all his financial responsibilities taken care of, he was able to present his ideas to his Unit Leader, the Unit Committee, the Beneficiary and finally the Council.

This process took about 10 months. On Sept. 25, 2019, Craddock’s pet service day dreams came true. People gathered outside of his church to adopt dogs and get free rabies shots for their pets. Two dogs went home with loving families and 50 pets received a shot.

Completing that task had finally earned him his place as an Eagle Scout. Craddock says the years of effort and perseverance were all worth it for him.

Along with all of his accomplishments, Boy Scouts of America offered him various scholarships. He is appreciative of that, but he feels that the greatest gift is to help other scouts  reach Eagle Scout too.

“I’ve had more younger scouts come up to me and ask for help on merit badges.” Craddock said.

As a leader in his community and to other young Scouts, Craddock plans to continue his legacy by becoming a camp counselor and adult leader in the future.