Mental illness should be treated with respect and with understanding 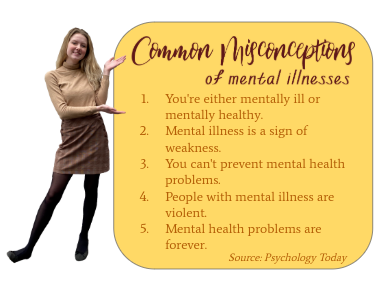 Mental illness has been an essential part of a high schooler’s career. If the student doesn’t have a mental illness, then they know a student that does which makes mental illness a really easy way to be relatable. However, this shouldn’t be the reason to joke about something someone is suffering from.

I have obsessive compulsive disorder, and the number of jokes I hear about “OCD going off” when pencils aren’t straight or papers aren’t in order is more than what’s appropriate. People often confuse their definition of OCD with organization. The disorder can be wanting everything to be neat, but that’s a huge stereotype that people should stop using. The same could be said about anxiety, depression, bipolar and many more unknown disorders out there.

I understand I would be a hypocrite if I said I didn’t joke about mental illness, but since I’ve developed a mental illness, I’ve discovered how it feels to have something I suffer from belittled. It makes me not want to talk more about it, but I have discovered the importance of talking about my mental illness because presenting this mental illness in a more realistic light could possibly help others. On the flip side, though, it makes me more empathetic towards other mental illnesses that I don’t have that I hope more people could learn about.

I read books and watched movies that contain these mental illnesses to better understand the situations these people experience. I’ve learned how to articulate my words to make sure I don’t belittle any mental illnesses because you never know what someone is going through. Granted, in my opinion, there are many forms of media that present mental illness in a light of their own or if there is any representation, it’s way too dramatic. Also, books that are taught in schools aren’t as diverse but are getting better.

I’ve learned that a way to share the different approaches people could take to be more empathetic towards, not just mental illnesses, but forms of life that aren’t their own. Sympathy isn’t usually the route people with a mental illness want because they have felt pity for themselves and they spent many hours trying to gain the courage to share a piece of their lives. When the recipient of the information feels sorry for them, it feels more like a full circle moment. Though I am speaking from personal experience and every experience is different.

Being empathetic can help a person understand the world around them and not be ignorant of the world. I personally don’t like being ignorant because I find all walks of life, including mental health, to be important, and I hope others do too.