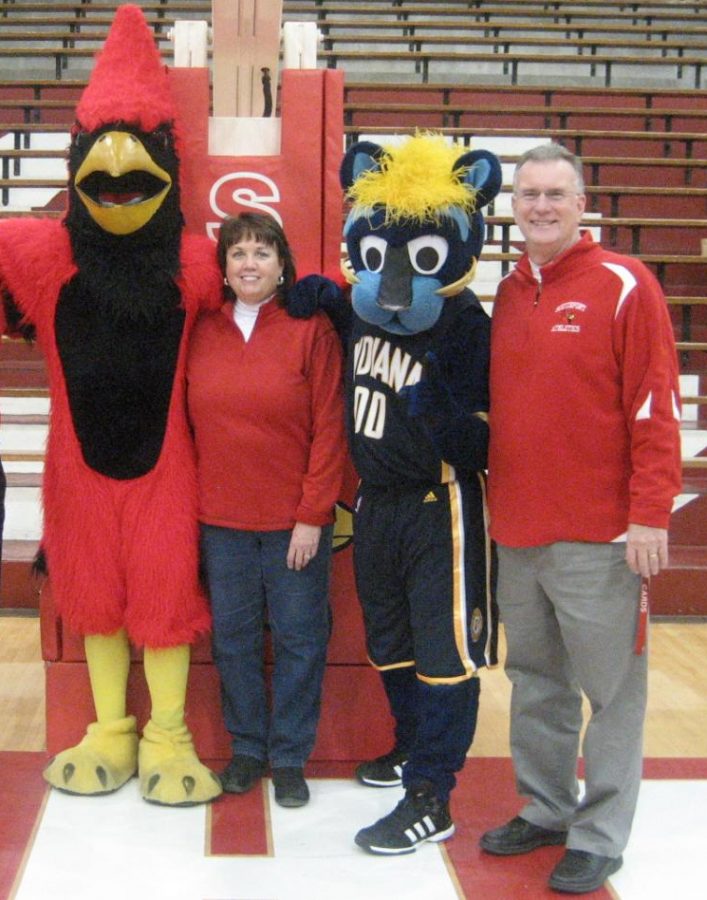 Athletic Secretary Peggy Warner and Athletic Director Pete Hubert have worked together at SHS for over 10 years. They don't get to properly end their final year at SHS due to COVID-19 effectively closing school and athletic events.

After working for over 10 years at SHS, Athletic Director Pete Hubert and Athletic Secretary Peggy Warner were hoping to end this school year walking the halls of SHS and attending sporting events.

Warner and Hubert are retiring this school year. They are unable to end their final year at SHS properly due to COVID-19 effectively canceling sports and traditional, face-to face-classes.

“These are celebrations and things that should be granted to these two, but unfortunately, we cannot provide those experiences,” Knight wrote in an email to The Journal.

Throughout their tenure at SHS, both Hubert and Warner say that they have many positive memories, memories consisting of sporting events and the time spent with those around them. Hubert says that he is grateful to have had the opportunity to work at SHS for the past 17 years.

As Warner reflects on her time at SHS, she says she always cherished the people around her the most. Earlier in her career, she wanted to create a place for the community to gather. Thus, she created “The Cardinal’s Nest” located in the SHS Fieldhouse. It became a hospitality room that reflected SHS pride.

“The Cardinal’s Nest brings back a lot of memories for me and others with its SHS memorabilia,” Warner said.

Senior Jordan Tweedy says that he admires Warner’s efforts to bring people together. He was one of her student assistants this school year and says he enjoyed every minute of it.

Sporting events is one thing Hubert says he will miss the most. One of his favorite memories was the SHS basketball game against the Evansville Reitz Panthers.

“I’ll never forget how full the Fieldhouse was of basketball fans,” Hubert said. “It was an awesome game.”

Sophomore Caroline Reinke believes that Hubert has always been a great supporter of  SHS athletics, especially this year’s swim season. She was his student assistant and says she feels sad that she won’t be able to see him every day.

“I’ll miss him saying ‘Hi, swimmer,’ every time I step into his office,” Reinke said.

Although Hubert and Warner aren’t ending the school year physically in SHS, they believe that they have made the most of their years here. Hubert is hopeful that his legacy and hard work will put the next athletic director, Brian Murphy, on the right path.

“I’m hoping that after 17 years, I’ve left a pretty positive and solid foundation for him to continue,” Hubert said.

Warner says that she is disappointed she can’t say goodbye to the SHS community in person.

“It makes me sad that I can’t say my goodbyes to our seniors, my student assistants and the staff,” Warner said.

Even after they retire, Hubert and Warner plan to support SHS.

“I’m definitely going to be SHS’s biggest fan,” Hubert said. “And I’ll watch our kids grow just like I did when I was there every day.”