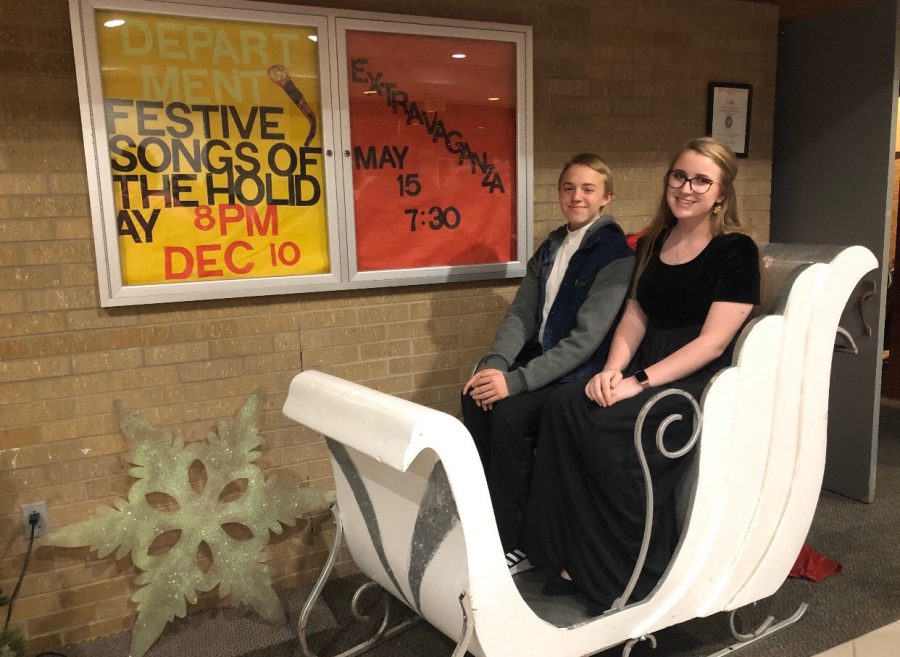 Junior Hope O'Connor and sophomore Hayden Brite were in band together. O'Connor will also be leaving after this year, meaning leaving some of her best friends behind.

When junior Lexi Ferguson was practicing for her last band concert at SHS, she never expected it to get canceled due to a pandemic.

When she found out that her concert was canceled, she was surprised and upset.

“My initial reaction was shock because this would have been my last concert with Southport,” Ferguson said.

Other students at SHS felt the same way about the cancelation of their music concerts.

Sophomore Madison Neuman, who is involved in many band activities at SHS, such as jazz band, marching band, advanced band, pep band, drumline and pit orchestra, shared her feelings on the cancelation of her events.

“Because of this current situation, our last two drumline competitions were canceled, and so were the other band concerts,” Neuman said. “I don’t like the concerts getting canceled because I worked so hard for them, and all that work goes to waste.”

She also mentioned that she feels other people are disappointed, even non-music students as everyone was looking forward to the concerts.

Junior Hope O’Connor finds it more disappointing for the seniors, as she thinks that the seniors didn’t get to really say a proper goodbye to the program that many of the seniors have put so much time into.

“I just think that the whole thing is sad overall”  O’Connor said, “The seniors always do gifts and we didn’t get to do that this year.”

Moreover, other than the effects on seniors, the cancelation also affects the music programs and their funds, according to junior Thomas McNeil.

“As extravaganza is a large concert, I know our school has missed out on the funds that could have been made from this concert,” McNeil said. “A lot of people attend this concert and pay to get in. This might make next year difficult for the music program.”

Neuman finds these concerts a big part of their music journey. According to her, people are as devastated as she is since everyone else was also looking forward to the concert(s) as well, especially the Extravaganza.

“These concerts are a chance to show everyone how much we grow and how great the music at our school is, and that performing arts is worth all this and effort,” Neuman said.