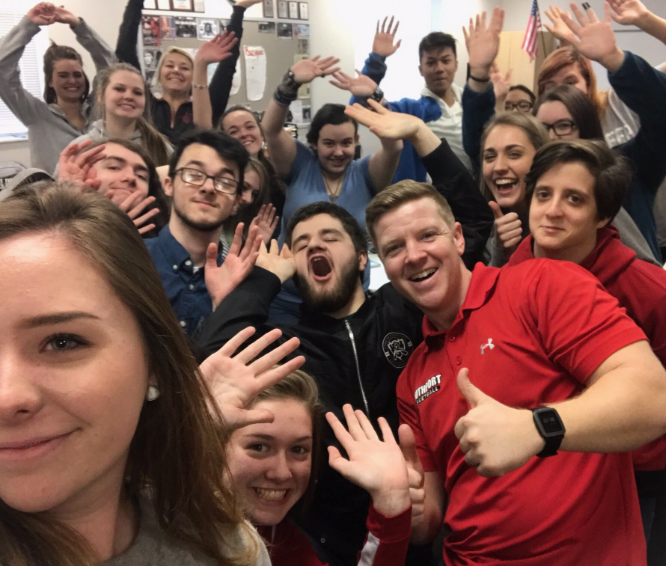 Social studies teacher Daniel Jones poses for a selfie with one of his classes. Jones works to create an inclusive learning environment in every class.

Former SHS Principal Barbara Brouwer distinctly remembers her interview with Daniel Jones. She says that he was the worst interview she ever had.

He was unsure of himself. He didn’t grab her attention and make her feel like he knew the curriculum through and through. But, in spite of all that, she hired him anyway. It proved to be the right decision.

Jones has now been named the 2019-2020 SHS Teacher of the Year. This award comes from his passion for teaching and his drive to always improve. It also stems from the unique connection he makes with his students.

“He connects well with kids,” Principal Brian Knight said. “He finds ways to make (material) really relevant and connect it to what kids are experiencing today.”

Jones says that one of the reasons he is able to connect with students so well is because of his background. When he was a student, though he did not have issues academically, he was immature and needed discipline. He had teachers who were there to push him and make sure he was living up to his full potential, and now he wants to do the same for his students.

According to Jones, his own history with immaturity and “mischief” allows him to connect with a wider range of students, not just those who are traditionally successful in school.

“I want to reach those students that are not quite a… straight-A student,” Jones said.

English teacher Brent Bockelman has known Jones since elementary school. Bockelman says that he has seen Jones transform from a somewhat “immature kid” to a teacher who is passionate about his craft.

“I think his passion for education is the pillar of his practice,” Bockelman said. “He doesn’t cut corners and doesn’t accept that mentality from his students.”

However, Jones’s journey to the classroom did not start from a lifelong interest in teaching. He really wanted to be a coach. While he was struggling to find a teaching job to support this interest, he was working as the manager of a valet service. It was during that time when former SHS baseball coach Scott Whitlock called him and told him about an instructional aide position.

Whitlock then offered the job of assistant baseball coach to Jones while he was working as an aide. So, Jones decided to take the job, and after a while, teaching itself became one of his passions.

“Candidly, I may have got into it for coaching, but once I got into it, I fell in love with the teaching,” Jones said.

That love affair with teaching began in 2009 when he was hired as a full-time teacher at SHS. Brouwer hired him and was the one who gave him the classes he teaches now: A.P. Psychology and A.P. Human Geography. He is thankful that Brouwer gave him the opportunity.

“Ms. Brouwer believed in me in a way that I did not believe in myself,” Jones said.

Jones’s teaching style is very much focused on creating a connection with his students. He says that he wants them to participate and feel like when they answer, what they say is not only wanted but also valued.

He says that he thinks it is helpful for students to hear their names and that he engage with them every class or as often as possible. But, he does not believe that he is completely there. He continues to work on creating an inclusive environment every class.

“I think I struggle with that,” Jones said. “But out of that struggle is a desire to (make every student feel a part of the class).”

Jones’s unique ability to connect with students transcends the walls of SHS. When Cardinal Academy first started, Jones played a major role in its development. He and Kristina Johnson were the two administrative heads of it. There, they were able to help students who might not be able to go into a normal classroom due to past disciplinary offenses. Those students were able to do classes online and still get their high school diploma.

During his one year of involvement with Cardinal Academy, Jones wanted to push students to their full potential like he does with those in his classroom at SHS. From his slightly mischievous background, he knew the value of having someone be there to make sure he was staying on the right path.

“Ms. Johnson and I just looked to establish relationships (and) establish trust and a caring two-way relationship with those students,” Jones said.

Jones says that creating connections with his students was never very difficult for him. He says that the connection was “just there.” It never had to be forced or manufactured — it was natural. Even now, he still has relationships with students from his very first year of teaching.

“As those guys and girls have grown up into adulthood, we’ve become very friendly,” Jones said. “It’s … an adult to adult relationship.”

As well as in the classroom, Jones can connect with his students on the field. He was a baseball coach for 12 years at SHS and is now a coach at SMS. Similar to how he wasn’t a straight-A student, he wasn’t a star athlete, but he worked hard to improve. He uses this experience to give his athletes encouragement to not give up.

“When there was a kid who may be struggling with playing time, I was able to talk to them about ‘Hey listen, I struggled with playing time too, man,” Jones said. “‘I only started two games as a sophomore on JV, and then I was up on varsity the next year, but you don’t get there by something being given to you. It takes a lot of hard work. It takes a lot of doing the right thing when no one’s looking.’”

From the connections he makes in the classroom and on the field, students feel like his style of teaching shows that he cares for them.

“I admire the passion and enthusiasm he always shows every single day during class,” senior Megan Frank, a student in A.P. Psychology, said. “It could be an off day for him, but he still puts his students before himself every day.”

Other teachers have picked up on his ability to connect with students and have seen how it affects students. Bockelman says that he has noticed the ability Jones has to spark their interest in the material.

“I’m sure he doesn’t know this, but sometimes during my prep period, I’ll stand outside his door and listen to what’s going on inside,” Bockelman said. “He knows how to capture his students’ attention and keep them engaged.”

One way that Jones goes above what is expected is that he uses outside sources, like TED Talks or clips from movies and television shows. Then, he tries to connect what is being learned to current events and other classes. In addition, Jones puts in extra work by recording lessons and putting them online to help students study or catch up on missed work.

“He genuinely cares about his students, and he goes above and beyond with every one of his lessons, and he makes sure we know what he’s teaching before he moves on,” senior Bianca Foronda, a student in his A.P. Psychology class, said.

When speaking about the award, Jones says “this is about the students. It’s not about me.” He thinks that the award is a testament to all of the work that they have put in. He says that it’s their award because they have helped him build his classes into what they are today.

When Jones first found out he was the recipient Teacher of the Year, he didn’t believe it. In fact, he says when he saw that he was getting a call from Knight, he thought he could’ve been in trouble. Then, once Knight broke the news, he was speechless, and when he finally responded, he was gracious and felt undeserving.

“When I called him and told him he is going to be the teacher of the year, the first thing he said was ‘There’s so many other good teachers in the building. I’m probably not deserving of that,’” Knight said.

From walking the halls of SHS as a student to walking them as an educator to walking them as Teacher of the Year, Jones has many memories of growing up in the SHS community. He is thankful to everyone who was there along the way to guide him on the right path.

“This community is so ingrained in the fabric of who I am that I want my children to grow up in this community,” Jones said. “I want to pour into this community. I want to give back to all the people that put time into who I am.”