Puppy mills should be illegal 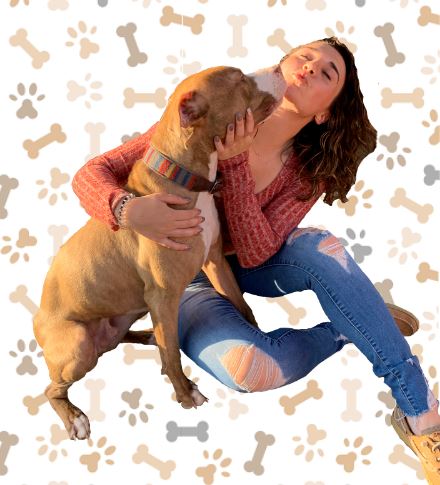 I sat in a car for three hours to pick up my puppy, Cyrus. He was an 8-week-old, fourth-generation American bully, a mix between a pit bull, american bulldog, bull mastiff and bull terrier. As excited as I was for this new addition to the family, it was obvious from the time we pulled into the driveway that its original owner had lied.

Cyrus was shaking in the man’s arms. He was dirty, sad-eyed and couldn’t seem to relax long enough to realize there were people around. The man told us that he was the last pup of the litter. He also claimed to own the father and told us he was skittish because “his kids had dropped him.”

It was a long three-hour drive home. I sat in the front seat holding my new, shaking puppy as my mom and I tried to uncover the true past of this scared pup. After months of questions, deleted Facebook accounts and new litters of puppies of different breeds from the same man, we came to the conclusion that Cyrus did not come from a loving home but instead from a puppy mill.

There are over 200 puppy mills in Indiana alone, four of which are among The Horrible Hundred of the United States, an annually updated list of the most problematic breeding facilities. Since dogs are considered livestock as long as the mills are licensed by the USDA, they are allowed to practice this form of commercial marketing and mass production of animals. Consequently, the public’s ability to shut the mills down is very low.

Often, puppies from mills are sent to pet stores and then bought by families who are unaware of their conditions growing up. According to the nonprofit pet organization PAWS, 90% of puppies in pet stores are from mills, and these puppy mill owners are also able to sell their dogs through TV and newspaper ads. These same puppies are often then given to shelters because the family that bought them was not prepared for their challenges.

In puppy mills, the dogs are put in close quarters with little to no room to move around. Puppies are packed together in unsanitary conditions, with dirty water and an inadequate amount of food. These conditions often lead to starvation and can result in untreated injuries like missing toes or infections. Puppies also end up with behavioral problems, like aggression or intense timidness, due to early separation from their mothers.

In these mills, the goal is to have as many puppies as possible. Females are bred too often and sometimes with relatives or offspring, creating major medical issues for those particular litters of puppies. These mothers can suffer from severe separation anxiety since their puppies are usually taken before 8 weeks, the recommended time a mother should keep her puppies. After the females are unable to produce, they are usually discarded or killed.

In my case, Cyrus was born in a puppy mill and then bought by a man who turned around and sold him under falsified information for more than he paid. This idea of cash-crop breeding should be illegal, as it is unfair for the animals suffering in poor conditions and the families hoping for a calm family pet. Dogs are not meant to be the product of factory work and should not be considered livestock.

Cyrus no longer shakes around men, hides in the very back of his crate or needs to be as close to me as possible when there are strangers around. But, not every puppy from a mill ends up in a home with seven people willing to work through the bad habits and placed with a mature dog that has been in the family to help ease his fear. Ending the use of puppy mills will prevent more dogs from growing up like Cyrus and will increase their chances to be a part of the loving family that they deserve.