Junior connects her passion of art to her mental health 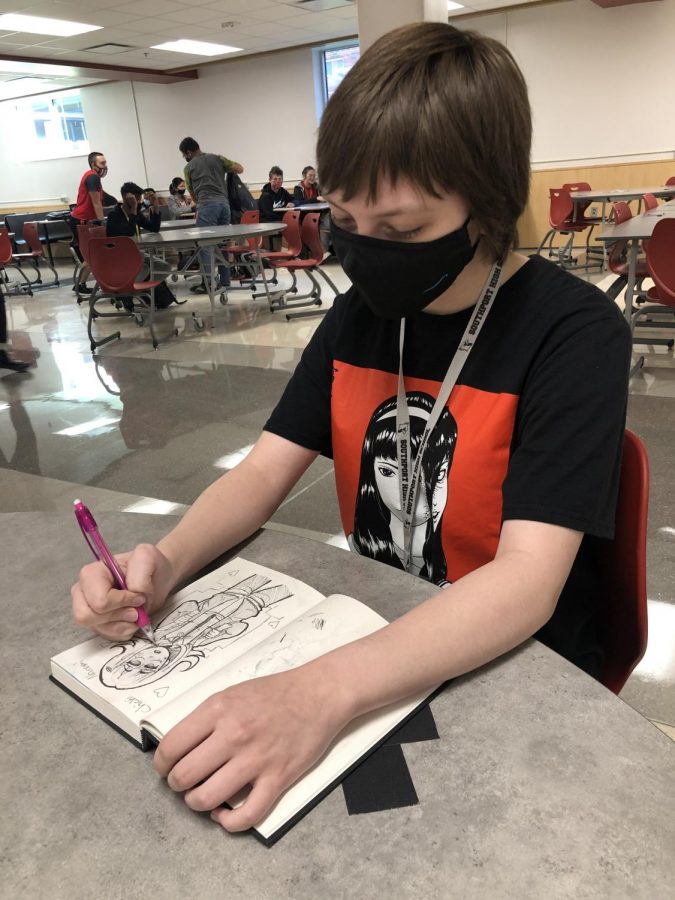 unior Heidi McMullen draws one of her characters during her lunch period on Sept. 25. McMullen says that drawing calms her nerves.

From the moment junior Heidi McMullen picked up a pencil, creativity started flowing from it. Since then, art has been a driving force in her life.

“It’s something that keeps me going when times are down,” McMullen said.

McMullen has a passion for art. As she’s grown older, she’s learned that this passion has a double benefit because it also helps better her mental health. McMullen says that when she creates art, it brings her a sense of positivity and happiness.

Art Teacher Breanna Bierod says that art can boost someone’s mood in a positive way. When she’s feeling down, she feels that it’s really reflected in her art. Alike  McMullen also uses her art to benefit her mental health and put her in a better mood.

Beginning in kindergarten, McMullen began drawing. As she’s shifted into her teen years, she dove deeper into her passion for art. McMullen says that art was always something

that she enjoyed in class. One day, a teacher pointed out how good her art was. From then on she used that as motivation.

“I guess that motivation turned into an outlet and so I started taking it all more seriously,” McMullen said.

With compliments from teachers starting from when she was young, McMullen felt that she was a natural. She says that she’s taught herself most of the artistic skills she knows today. McMullen currently takes art classes at SHS where she says she learns even more. She says that she is grateful for the opportunity because her last school didn’t challenge her creativity.

“The school I used to go to did not support art and they were only big on sports,” McMullen said “Going here has really pushed me.”

Bierod says that mental health awareness is something that is very important and necessary. Art is self calming and used as a type of therapy for many students included in art classes and programs.

“I feel like it’s still something that really needs to be taught more,” Bierod said.

When it comes to sharing her work, McMullen likes to create things for herself and others, as well as helping other aspiring artists.

“I also like to collab with other artists who are under-appreciated so I can help show off their work too,” McMullen said.

McMullen’s friend Jay Brumley agrees that art can definitely improve someone’s mental health as it has for McMullen. He says that art can be therapeutic in a sense when the artist is creating.

“It can be venting art or just to get your ideas down on paper,” Brumley said.

McMullen has a very supportive household when it comes to letting her creativity shine. She says that her parents have always been very encouraging and constantly enjoy seeing her artwork.

According to McMullen, her art teachers in the past have made so much of an impact on her life that she too aspires to one day be an art teacher.

“I want to be able to do that for other kids,” McMullen said.

Bierod says that having a student that can use art like McMullen benefits their mental health.

“That is what I want for a student,” Bierod said.

Although McMullen says her journey has been fairly eventful, art is one thing that helps her through it all.

“It was a pretty rocky roller coaster to put it lightly. I had a lot of ups and downs so art was kind of one of the things that kept me going.” McMullen said.