SHS has a different approach to finals during virtual instruction 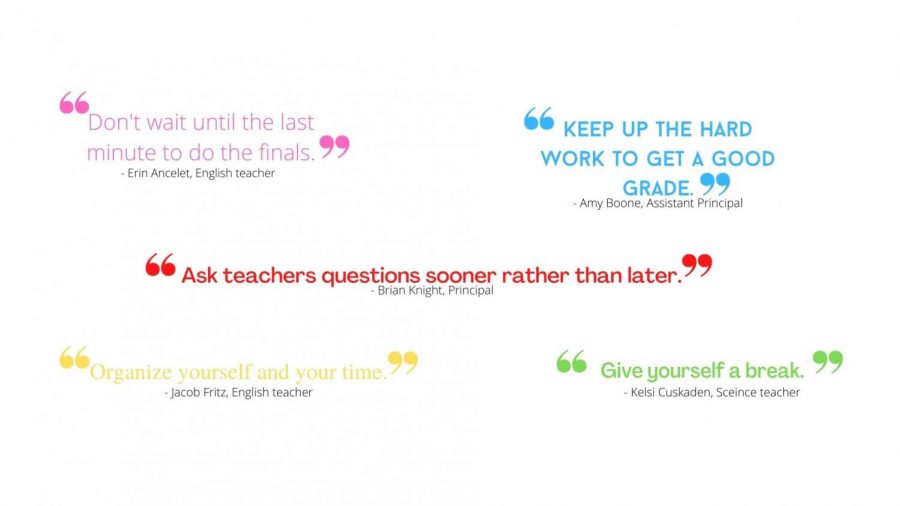 SHS staff give tips on how to help succeed on finals.

Around this time last year, many students were reviewing with their teachers in-person and studying for their end-of-the-semester finals. But this year, there isn’t even a final exam schedule.

The concept of finals has changed for this immensely, as Principal Brian Knight has strongly encouraged teachers not to give a traditional final exam this semester because of the circumstances some students may be in.

“I don’t think we can, in good faith, require it..,” Knight said. “Knowing the diversity of our students and some of them working, or some of them taking care of younger siblings.”

Knight also believes that due to all students being virtual, it doesn’t make sense to give an actual exam because it’s very easy for kids to cheat.Teachers would not be able to accurately see what students struggled with that semester.

Science teacher Kelsi Cuskaden, as well as some other science teachers, are going to go over the last two sections they have and just do a mini-quiz over them. This way they can just be done.This is different than what they normally do, which is to give a large multiple choice test over everything the students have learned thus far.

“As a teacher, one of the most important things is to try and help with stress and it just didn’t feel right,” Cuskaden said.

While Cuskaden has had to change quite a bit of her plans, English teacher Erin Ancelet hasn’t had to change that much about her finals, she just decided to make them virtual.

For her speech class, her students will deliver their final speech virtually rather than in class. Her English class is also doing roughly the same thing as last year, except they only present their final project to her rather than her and the rest of the class in a “gallery walk.”

She hopes this will be more interesting to her students rather than other options for a final.

“I wanted (the final) to be something creative and hopefully kind of fun,” Ancelet said.

All of these changes being made are ultimately in an effort to be as fair to the students as possible with the circumstances they are in.

However, Assistant Principal Amy Boone wants to remind everyone that the grade they get on the final will affect their overall grade, and that grade will still go on their transcript. This situation is not like last semester when a student passed no matter their grade because of the quick switch to virtual learning.

Because of this, she reminds everyone to work hard on their altered version of a final, even though it may be different.

“Take advantage of the opportunity to work to complete any missing assignments and work to finish the semester strong,” Boone said.