A fight for democracy 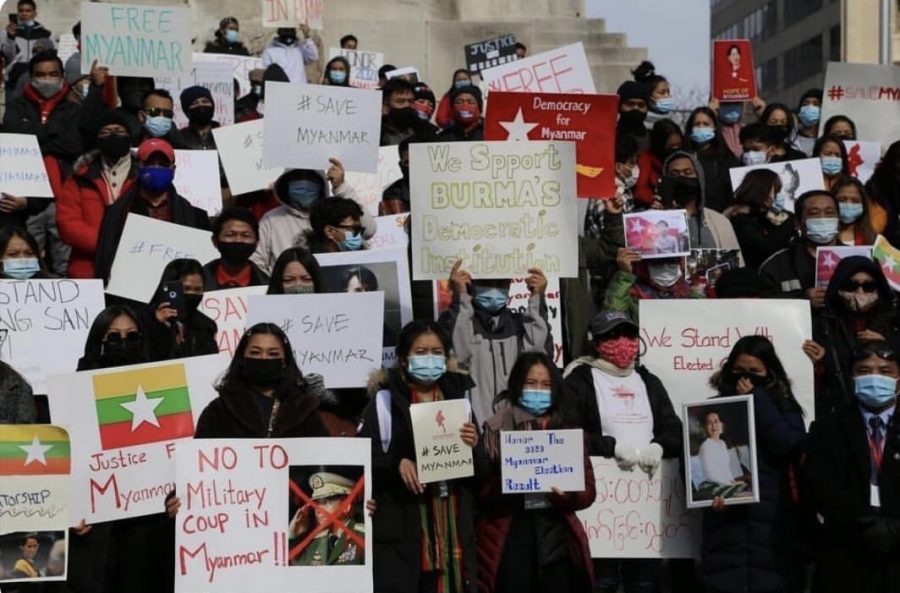 Burmese citizens living in Indiana protest against the coup in Monument Circle on Feb.6. They hoped to bring awareness and seek help from officials.

The people living in Myanmar, previously known as Burma, have been facing a national state of emergency since Feb. 1 due to a coup led by Military General Min Aung Hlaing and the kidnapping of high elected officials, including the elected chancellor Aung San Suu Kyi. The military has said that the state of emergency will last one year.

These events have had effects on both those living in Myanmar and the Burmese people currently living in the US. Teachers and students have said they are feeling frightened and angry at these events.

The kidnapping is thought to be due to the election results from the November election. Suu Kyi’s party won the majority in the election against the military, which made them claim that it was only due to election fraud. The military later announced that 24 ministers and deputies had been removed from their position and replaced with leaders from the military.

“It still hurts me to see my birth country go through that kind of catastrophe,” junior Mang Sung Tial said. “After all those years of fighting so hard to become a democratic country, it’s just saddening to see it be corrupting within just a day.”

The election in 2020 resulted in the military losing some of their power, and Tial says that she thinks the action was taken by the military recently was due to the want to regain their control over the country and the people.

Soldiers have since been patrolling the streets of large cities in Myanmar, and a night-time curfew has been enforced. Biology teacher Miriam Mawi also thinks that the military has begun taking away their citizens’ rights in order to control them.

“It’s terrible,” Mawi said. “They are scared…The people who had money in the bank, they can’t go to the bank to get the money out. And people are panic buying. And on top of that, they still have COVID going on.”

This state of emergency is not only affecting the people living in Myanmar. There are many SHS students who have family in Myanmar who are scared for their safety.

Senior Mary Sang says that the rules put into place by the military have increased her fear for her family and friends. Sang said she is even more fearful for her family due to having no way to communicate.

Tial has also had to face the fear of her family being in danger, and due to no communication, has no way to know whether they are safe.

“My uncle back there, he’s in house arrest and taken away from his family,” Tial said. “As long as he is physically not damaged or hurt, then we are fine. But it’s hard to know because connections are cut off.”

Due to the danger the Myanmar citizens are in, the students believe that it is important for the U.S. government to intervene and provide support.

Tial thinks the best way for them to do this would be to warn the military leaders that further action will be taken if they don’t comply and for them to provide monetary support.

“The best thing for the US government could be to send out a warning to the military,” Tial said. “But also provide money if they could. The people back there wouldn’t have to worry about being powerless or worry about not having access to food and drinks.”

However, it is not only the US government that can help. As citizens, there are ways people, including students and teachers, can help too. Tial says that protests like the one held in Monument Circle on Feb. 4 will be very important to help Myanmar.

She also wants people to know that these protests are safe and monitored by leaders in the community and that the protests should not be feared.

“It was mesmerizing to see all of my fellow Burmese citizens come together to protest,” Tial said. “It was safe. They took precautions and made sure to mask-up and they made sure to not be violent. They protested silently with respect, which was wonderful to see.”

Although she thinks the protests are important to bring change, Mawi says that even if you can’t go to the protests, there are still other opportunities for people to help the cause and spread awareness.

“I think it is important that everyone bring this issue to the light,” Mawi said. “And if everyone can share something about Myanmar in their social media account, I think it will make an impact for the Burmese people.”