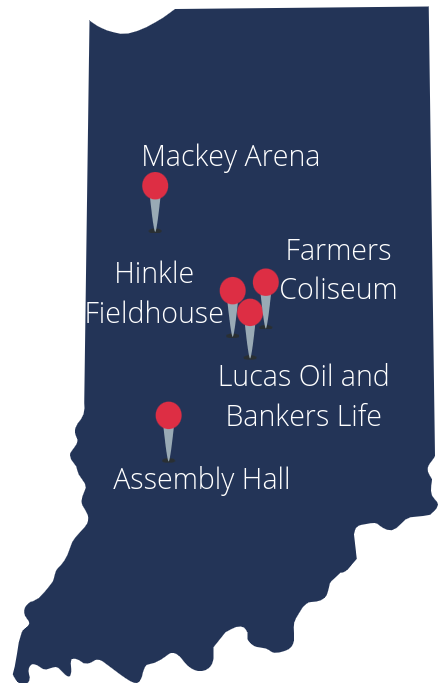 For the first time in NCAA history, the entirety of the NCAA March Madness tournament is going to be held in the same state, Indiana.

The games will be played mostly in venues in Indianapolis including Lucas Oil Stadium, Bankers Life Fieldhouse, Indiana Farmers Coliseum and Hinkle Fieldhouse. The NCAA will also make use of two college arenas outside of the Indianapolis area, Mackey Arena in West Lafayette and Simon Skjodt Assembly Hall in Bloomington.

According to Fox 59 News, the March Madness tournament will be extremely financially beneficial for the state of Indiana. It is estimated that Indiana’s economy will gain up to $100 million. According to IndyStar, since the tournament was cancelled last year the NCAA gained about $178 million related to championships and the NIT tournaments.

“Any time you have a big tournament like that, you bring people in or if they are watching go on TV, it gives exposure of the city,” Athletic Director Brian Murphy said.

The NCAA tournament announced that they would allow fans up to 25% capacity, according to ESPN. Fox 59 News says this is a good sign for the Indianapolis area because surrounding hotels and restaurants need the money to help their business due to the financial hit they took from COVID-19.

However, it could cause complications because of the pandemic. Since fans are allowed to watch in person, more people will be coming into the city, which could cause an increase in the COVID-19 cases in Indiana.

Since the tournament is using venues throughout the state, some believe the SHS fieldhouse could be used in some way for the teams coming to Indiana.

According to Murphy, it would be very nice if SHS could play a role in the tournament, but it is hardly likely. The court in the Fieldhouse is a different size than NCAA’s regulation, so they couldn’t play games here.

Despite that, one team has already used the fieldhouse as a practice facility. On Wednesday Mar. 10, in preparation for their game in the Big Ten tournament, the Northwestern Wildcats had a shoot around in the Fieldhouse.

“I would hope some teams would come and practice,” Murphy said. “If they are not allowed to use the college courts for practices, then this would be the best venue.”