In-depth review into the controversial and problematic movie, 'Purple Hearts' 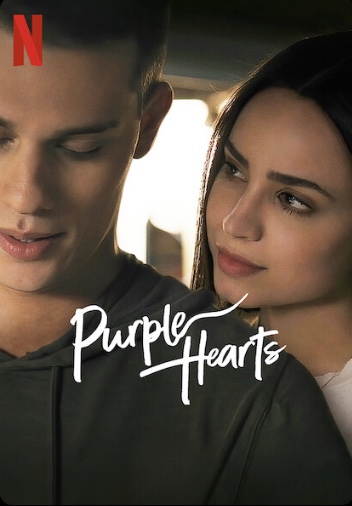 One of the most popular romantic movies in 2022, ‘Purple Hearts,’ was released earlier this summer as it instantly took the number one place on the “Top 10 Movies in the U.S. Today” shown on Netflix. About two months into its release, it became a common topic among common social media platforms. It’s been controversial as the majority of viewers agreed that the movie was problematic, but some also disagree as it included many popular romantic tropes that they liked.

First, the movie starts where the two lovers display their differences in their political views. They get into a terrible fight the night they first meet. However, conflicts in both of their lives brought them together. The female lead, Cassie who is played by Sofia Carson,  needed insurance money for her diabetes, and the male lead, Luke who is played by Nicholas Gilitzine, also a former drug addict, needed money to pay off his debts for his past mistakes.

The two later engaged in a fake marriage to gain the benefits of the military, as Luke prepares to enlist in the Marine Corps, and it was a state of emergency for both of them. Gaining benefits from the military would mean that Cassie would get insurance for her diabetes treatment, and Luke would get the money he needs to pay off his debts. The two went on to pretend they’re in love for safety reasons. If they were to get caught in this scheme, it could result in jail.

That seems like a pretty solid love story if it is put that way. However, it just doesn’t make sense how the two never really understood each other. After falling in love, they never talked about their differences again. It showed how the two got along later in the movie, but it never showed how they navigated their differing political views.

Did she just forget about how he views the world and how his friends act? The political view of an individual isn’t something one can simply ignore, especially if that individual is a significant other. If the story started with them not understanding each other, shouldn’t it end with them understanding each other completely, even their political views?

The movie also had insensitive scenes where Luke’s friends were bluntly racist. A particular scene that enraged many audiences on social media platforms such as TikTok and Instagram was when one of Luke’s friends made a toast to “hunting down some godd–n Arabs.” There could have been other ways to show how the two live in opposite worlds, but the movie instead points out an ethnicity that is actually going through horrible stereotypes and racism daily in America. Although that scene was very problematic and hurtful, maybe viewers can take account into seeing what’s right and wrong through this scene.

Another controversial topic in the movie was how Cassie promotes the idea of Feminism in an aggressive way toward males. She encouraged the stereotypical idea that feminism means that women are superior when in fact, feminism is all about equal rights for women. In reality, feminists are already facing prejudice as many assume that feminists think they are better than men.

This movie also set an unreasonable example of what success is. Cassie is an inspiring singer, and the process in which she achieved her goals was very rushed. The movie set too high of a standard and expectation for happiness. The two realizing their love for one another should have been enough, but the movie went on to show Cassie’s success in her career. If everything in their lives falls too perfectly, it seems unrealistic. Overall, this could have been a great love story, but the problematic scenes that were shown in the movie cannot be ignored by viewers.

Aside from all of the controversial aspects, this movie had many popular tropes such as “enemies to lovers” and “fake relationships” that many audiences loved. It’s predictable that the main enticement of the movie comes from these tropes, and also the attractive cast members. Unfortunately, this movie is not everyone’s cup of tea.