The Journal Rewired • May 7, 2015 • https://thejournalrewired.com/3460/sports/lacrosse-team-suffers-senior-night-loss-against-rival/ 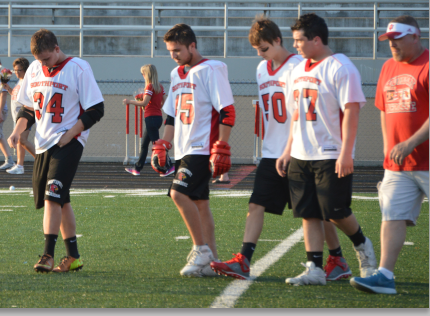 The SHS lacrosse team came into Wednesday night winless and feeling they needed to get a win. They were up against their biggest rival, Roncalli.

SHS lost to Roncalli, 14-4. It was senior night, and the game was for the Mayor’s Traveling Award. It was also SHS’s last home game this season.

“I think it’s always tough for the seniors,” SHS lacrosse head coach Doug Aldridge said. “They (have) played so hard their whole career.”

The Cards struggled early with a 10-3 deficit in the first half. Bob Rogers scored two much-needed goals in the first half though. SHS played solid defense in the third quarter, but the score remained the same. In the fourth quarter, SHS came back with a goal, but it was too late.

Midway through the game, freshman Josh Hancock got injured. He had to take some impact tests. It is unknown if he will miss any playing time yet.

There are four seniors on the SHS lacrosse team. They are Rogers, Warren Conatser, Zackary Hancock and Austin Lindbeck. They were all recognized at halftime for senior night.

“It’s kind of bittersweet,” Conatser said. “I had a lot of fun.”

SHS will be playing at Lawrence North next Tuesday at 6 p.m.