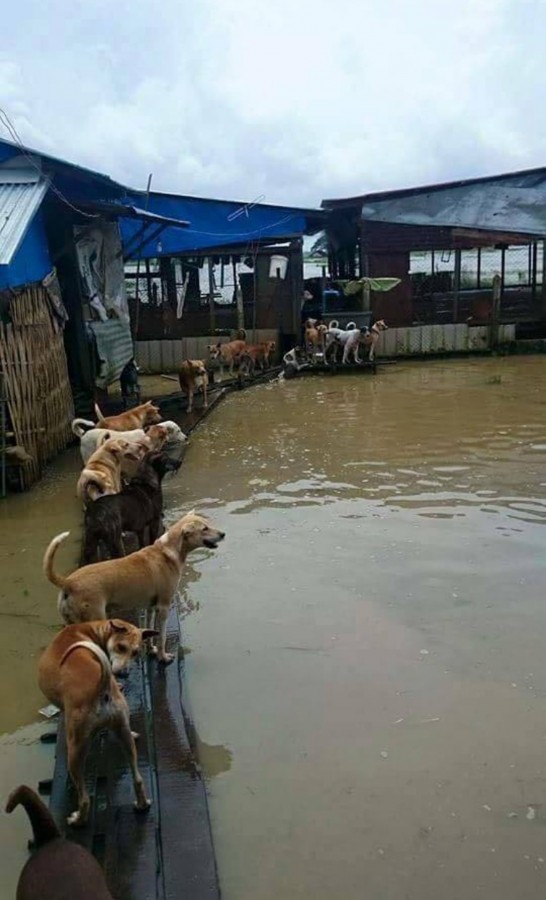 Dogs seek refuge atop wooden walk ways as they look out at their floating home in Myanmar.

Since mid-July, the monsoon rains in Myanmar have caused devastating landslides moving 4,000 people from Hakha out of their homes. At least one million people have been affected and 103 people have died. The news service Reuters called the flooding the worst natural disaster in Myanmar since a cyclone killed nearly 140,000 people in 2008. With these damages, the Myanmar government has asked for international assistance from all.

Junior Van Hnem, who has viewed stories over the flood on the news, began to understand how devastating the flood truly was and how it left Myanmar residents with nothing. Wanting to help, Hnem sought out her English teacher Ms. Sara Kohne to tell her of an idea to help by starting a fundraiser. Kohne expressed that Hnem should do the fundraiser at school; that is when they started talking to people to make it happen.

“I think we can do something to help the flood in Burma,” said Van Hnem, “So I thought maybe students and teachers can come together.”

Hnem and Kohne organized this fundraiser for the students and staff to make donations during ipass; the donations collected will benefit people in Myanmar who are affected by the flood.  Hnem says that the goal is for every student to donate at least one dollar so that they can raise around $2,000.

Even though Hnem does not have family members directly affected by the flood, she does have family in Myanmar that left their hometown to be in a safer place.  Hnem says that she hopes to make a difference with the help of SHS students and staff.

“There are so many people in our Southport and Perry Township communities who are directly affected by what is going on in Burma,” Mrs. Sara Khone said. “I was also very proud of Van Hnem for wanting to organize an event to raise money.”

Junior Joseph Ram Bik Ceul is one with family in Myanmar and has no updated information about his family members. As of right now, Ceul doesn’t have any way of contacting his family to learn of updates.

Burmese American Community Institute, BACI,  helps Burmese refugees find a community in Indiana and help them with any legal work they need.  BACI is organizing ways to aid flood victims and raise awareness for the flood as a whole.

“BACI is helping the relief effort by raising awareness of this dire humanitarian situation inside Myanmar in Indiana and the US as a whole.” said Elaisa Vahnie, Executive Director of BACI.