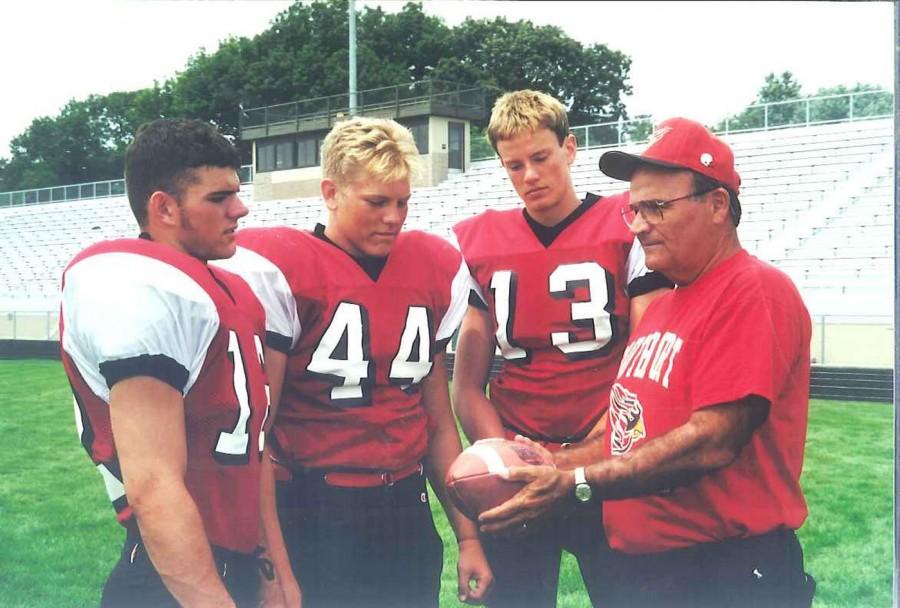 Former head coach Ken Haupt talks to player from his 2001 team. Haupt is the only coach from Southport that has been inducted to the Indiana Football Hall of Fame.

SHS will be honoring Indiana Hall of Fame head coach Ken Haupt and his 1985 and 1990 football teams Sept. 25. Haupt will be returning under the lights with his former  teams which recorded two of the best seasons in SHS football history.

In 1984, Raymond Fatheree, the superintendent of Perry Township, asked Haupt if he were interested in taking over the SHS football program. Haupt previously coached at Merrillville High School in Northern Indiana. Haupt took the position at SHS, and it allowed his wife, Judy, and him to move closer to their family who lived in Cincinnati, Ohio.

“It was very exciting accepting the challenge of taking over the Southport football program,” Haupt said.

While at SHS, Haupt had 82 wins and 91 losses between 1984-2000. Even though Haupt recorded 91 losses, he also coached two of the greatest seasons that SHS football has ever had.

While coaching at SHS, Haupt had two goals that he wanted his team to achieve. He wanted the sport to benefit the players by being fun for the athletes, and he wanted the athletes to maintain a good education.

Haupt believed that establishing a good foundation for the players’ futures and achieving a quality education were the best things for an athlete.

According to Haupt, the biggest key to his team’s success was their will to win. Their preparation to win was a vital approach to the football team’s attitude towards success.

Another aspect that Haupt believed helped these teams achieve their accomplishments was the team’s physical condition.

“This is one advantage that can be gained completely through determination,” Haupt said.

Players, such as former offensive lineman Mike Hittel, made great memories with the Indiana Football Hall of Fame coach.

“(There were times) when we were watching game films, and it was something where I screwed up and he would reverse the film back and forth to see the error over and over,” Hittel said.

In the ‘85 season, the Cards recorded nine wins and three losses. The Cards beat Perry Meridian for the Sectional title 7-0,  but ultimately lost to Bloomington South for the Regional title 9-0.

In the ‘90 season, the Cards won 11 games and lost two. In the first round of the  Sectionals, the Cards were against Terre Haute North, and went on to win 14-7. In the Sectional Title game the Cards faced Center Grove. Haupt had led his team to another Sectional title, rolling past the Trojans with a score of 22-0. After winning the sectional title, the team traveled to Evansville where they faced Columbus North. The team won 36-14. Finally, the Cards prepared for the Final Four game where they faced Ben Davis. The community rallied around the team the whole week preparing for the game. However, the team ended up losing 27-17.

On the 1990 team, Brad Courtney played tight end, defensive end and punter. Not only was Haupt a decorated coach, but he impacted many of his players, such as Courtney.

According to Haupt, leadership, high-achieving athletes, multi-sport athletes and parental support were the reasons these two teams achieved such great success.