The First Chin Medical Doctor in the United States 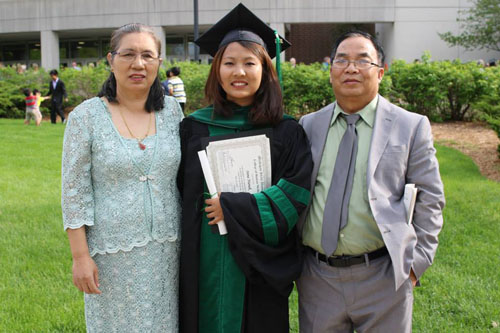 The United States accepted the first group of Myanmar’s refugees who were dwelling in Malaysia back in 2004 through the help of UNHCR.

By June 2015, there are now an estimated 150,000 Burmese population in the U.S. Among them, around 50,000 are from Chinland http://www.baci-indy.org. Coming to a totally new country, using the different dialect and learning in the new language is already a hard task. But, achieving a medical degree is beyond that obstacles and persistence which Irene Nunuk had just accomplished.

Among 50,000 Chin people, Irene Nunuk is the very first medical doctor among Chin Community in the United States. Irene received a Doctor of Medicine(MD) degree from Michigan State University College of Human Medicine in the spring of 2015. She is now living in Michigan and doing her residency in Internal Medicine at Medical College of Wisconsin.

According to Irene, she was 16 when she first arrived to the United States in 2004. There were many cultural gaps and language barriers for her and that never was the easiest thing to overcome. However, she was lucky that she had new friends who had been here before her to help with those difficulties.

“It was really hard at first. But, my friends advised me about the new culture and the school systems, what to do and not to do. And the good thing is our school has an ESL program. In ESL class, there were not only us (Chin people), but also other exchange students who came along the way from Japan and Korea. That encouraged me to learn more,” Irene said.

According to Irene, one of her biggest struggles were the standardized tests just like those non-native speakers. Even though she was pretty confident with math and science, she always felt left behind especially on reading and writing sections. She always had to catch up on those subjects. Other than AP Chemistry, Irene didn’t take any honors, AP, or DC classes back in high school. She didn’t get a high ACT score either. “But I still got in” Irene said.

Irene also managed her time for balancing her responsibilities. To accomplish a task, one must prepared both mentally and physically. It also is really important to get involved in after school activities and community service. She was an active member of NHS, Key Club, and multi-cultural clubs and played tennis in high school, according to Nunuk. She not only studied hard but also gave her time for family, friends and things that make her happy.

“Studying all the time is not the best idea. Your brain also needs a break, so that it can work effectively. I gave my time for my family, friends, things that makes me happy, church activities, and community services as needed,” Irene said.

While a lot of people are looking for the best and most famous colleges to attend, Irene wasn’t looking for that because going to school with the best students might add more stress. She said, she searched for the one that fit with her background education, her financial needs, and her personality.

Daniel Ling, SHS senior, respects her for being the first lady to achieve a medical doctor degree among US Chin people. He also learned a lot from her, Daniel said.

“Even though she was struggling in high school, she followed her dream and achieved it. If she can do it, why can’t we do it. Let’s us, as the newer generation, learn until we get doctorate degrees. We have to achieve it,” Ling said.

Bawi Vel Thawng, Chin interpreter at SHS, hopes that Irene’s accomplishment will encourage not only to SHS students, but also to the Chin youth in USA and around the globe.

“Since we were not born here, there are a lot of things we didn’t know and have to learn. Irene is an exemplar for us. She set her goal and she followed it until she reached her goal. Even though she faced many difficulties, she strived to achieve it. She was just a regular girl when she first arrived in the USA, but now she earned a title “Dr.” in front of her name that is which someone can’t buy with money. I respect and honor her for becoming the first person to achieve the MD degree in our Chin Community.”

Nunuk said she wants to encourage students to be “open minded and be consistent.” Not to forget the old culture, but to learn and respect the new culture. She invested her money, time, and energy to gain this degree. She wouldn’t be success if she gave up too early.

As long as for her vision, she didn’t dream a big dream, according to Irene. It’s not her vision to change the world or to change a village or a town. But at least to change one life, to touch one heart, and to cure one person.

“I’m trying to figure out myself until today. I just want to be useful in some sense. Hopefully, one day, if I can go back and visit to my hometown, I want to try to do some medical work, in the third world. That’s my goal,” said Nunuk.