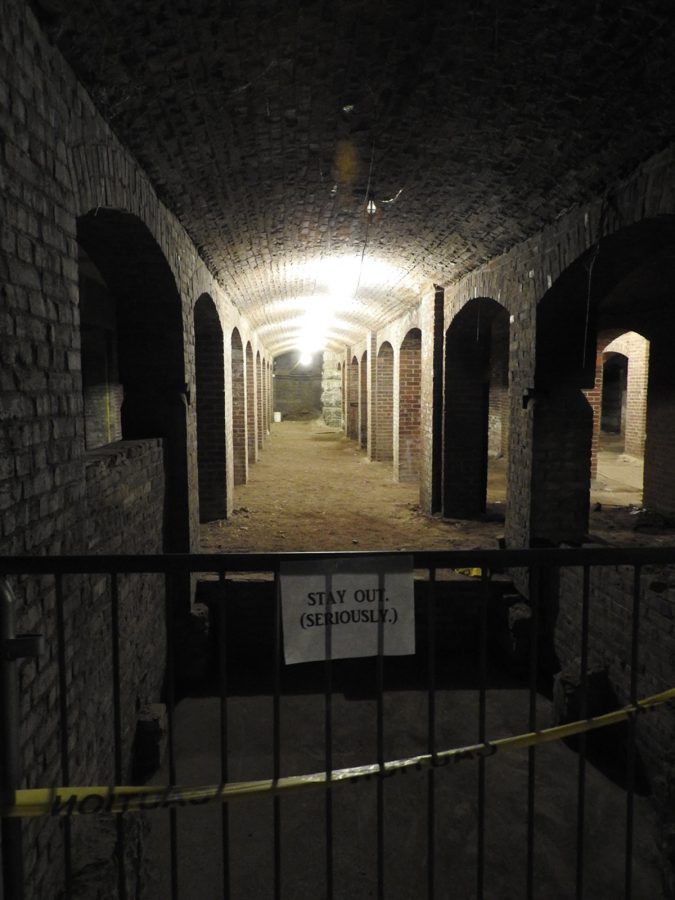 Picture of the Catacombs in downtown Indy on the evening of September 3.

Just two flights of stairs beneath the City Market in Downtown Indy are the remnants of the city’s past. These remnants are called the Catacombs; however, they aren’t quite like the catacombs described in “The Cask of Amontillado.” While these ruins are dark and damp and somewhat eery, they are quite different from what we know Catacombs to be.

“We call these the Catacombs, but they’re not like the Catacombs in Europe.” said Craig Barker, Indiana Landmarks Docent and Tour Guide. “We really don’t think there’s any bodies down here.”

Indy’s Catacombs are actually the basement of a building once known as Tomlinson Hall. These subterranean rooms, along with a structure known as “The Arch,” are all that remains of Tomlinson Hall since the fire of 1958 that destroyed the rest of the building. One of Tomlinson Hall’s claims to fame was that one of the first public basketball games in the city was played there.

Since the 2012 Super Bowl, the city of Indianapolis has been giving tours of the Catacombs. The tour begins at The Arch. Here, Barker explained the history of the City Market and Tomlinson Hall. Next begins the journey down under. Upon crossing the threshold from slightly-dusty carpet to a much dustier cement floor with paths of plywood sheets, the temperature change is much less drastic than expected. For the Catacombs, the typical rule that basements are chillier doesn’t apply.

Once fully immersed beneath the city streets, there are arches as far as the eye can see. While there may not appear to be much in the Catacombs, the history of the stony rooms tells of an eventful past. The main eyecatcher is the vast array of bricked arches lining hallways. In two of the corners of the Catacombs are dark rooms. Here, Barker tells us how they really aren’t sure what these rooms were used for and they have yet to explore some of them.

After making three-fourths of a square around the outer walls of the Catacombs,  Barker brought us to another brick wall. But this isn’t like the other walls. This one had arches at one time, but now they have been bricked up in a much sloppier fashion and nobody’s quite sure why.  Directly across from the disheveled wall, there are chairs arranged in a circle.

“People usually ask me if we do seances down here,” Barker said. “Not really. The chairs were arranged originally for a group called ‘The Threshold Choir’ .”

While the Catacombs may not be used for seances, there is some speculation that the Catacombs are home to a ghost or two. Fellow tour guide Barbara Goddard has two photos of light anomalies in one of the choir chairs.

“The site ‘Paranormal Research’ has a video of their experiments, of their light anomalies,” Goddard said. “And they even have sound anomalies, voice anomalies.”

The Indy Catacombs are just one of 12 known catacombs in the U.S. They certainly are a neat feature in Downtown Indy that most people don’t even know exists. Barker says that one of his favorite parts of his job as a tour guide is showing people something that they never knew existed just beneath their feet.

Indiana Landmarks isn’t quite sure what all the basement was used for, but they do know of a few things. For example, in the early 1900s, the Catacombs were used to shelter homeless men from the blizzard. Now, events such as parties and concerts are held in this unique venue. Around Halloween, there are special tours and even the occasional Halloween party.

Normal tours are on the first and third Saturdays of each month and ticket prices vary based on age. There’s so much to discover in Downtown Indy, you just need to know where to look. Some of the most unique finds may be off the beaten path, or like the Catacombs: so far off the beaten path that it has its own.