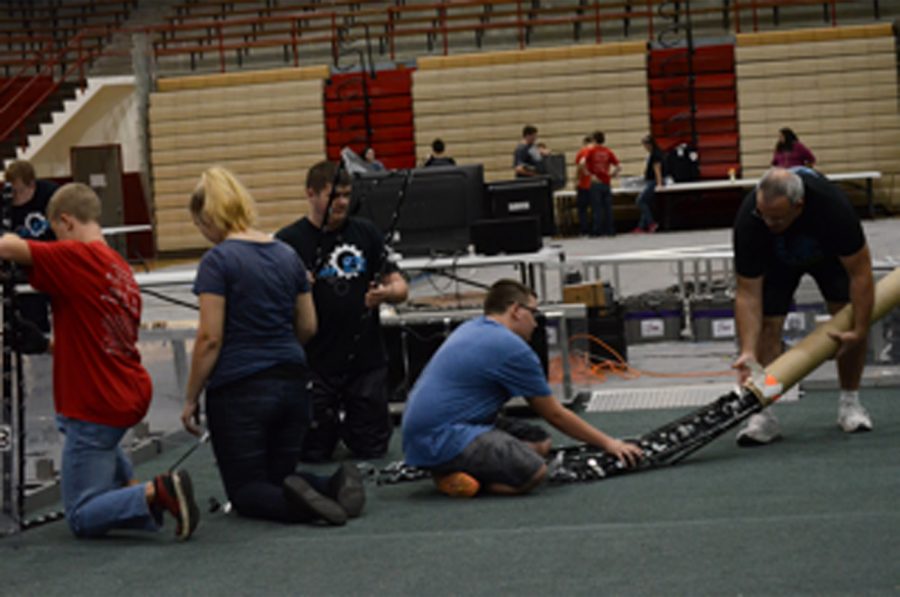 The SHS Robotics team getting ready for the CAGE match. This was the first CAGE match for some members and for Coach Snodgrass.

Rookies and first-timers on the SHS’ robotics team experienced what it was like to compete both against and with other schools in a CAGE match on Oct. 15.

In the fieldhouse at SHS, 29 different schools attended for an off-season Cardinals and Goats Exhibition, or CAGE match, designed to give kids with no experience on the robotics team the ability to drive the robot their team had built. All teams, except one from Chicago, are from somewhere in Indiana. SHS placed second in the contest where schools teamed up to compete, also known as the Alliance Contest.

The students from all of the schools in attendance had the opportunity to do all of the competing in front of big-time engineering colleges, such as Rose-Hulman, Purdue, IUPUI and Lincoln Tech. The FBI, Army,  Air Force and Navy were also in attendance and they talked to the kids about future careers and how robotics connects to them.

Snodgrass is a Center Grove native and a first-year teacher at SHS. He has already warmed up to the school and the people in it. He says that he enjoys robotics not only because it’s fun, but also because it can be applied to real life and can help students.

“This is a program. It’s not robotics,” Snodgrass said. “I want to be able to help every kid find their passion and get to what they want to do.”

Snodgrass says robotics is not just about students building a robot and hoping it wins. It’s more applicable to the real world and job market due to the fact that robotics deals with creating and managing websites, being able to market something and being able to create a business plan. He says that those are some of the things students may need to know how to do for future careers.

Regarding why SHS hosts all of the robotic events every year, Snodgrass believes that it’s for the Chairman’s Award. It’s awarded to people, or in this case schools, who have the most community outreach with For Inspiration and Recognition of Science and Technology, or FIRST Robotics. It’s awarded for being able to provide an area where rookies can be taught by veterans and it’s also awarded for being able to demonstrate the goals of FIRST Robotics.

Those include members of robotics being able to build self-confidence, communication and leadership skills. While Snodgrass does try to incorporate those into robotics, he feels that what sets him apart is he also focuses on the marketing aspect that can be be used later in life and to find what each student is passionate about. Then they can use that passion  to give students a more defined path if they didn’t already have one.

Snodgrass invites all students who are not involved in after-school activities to try something new and even says that students may find a new passion or path in robotics.

“If you don’t have a path but you have a passion, come see me,” Snodgrass said “Our team could use you. We’ll take your passion and move forward.”