SHS left to deal with the departing of winter musical lead 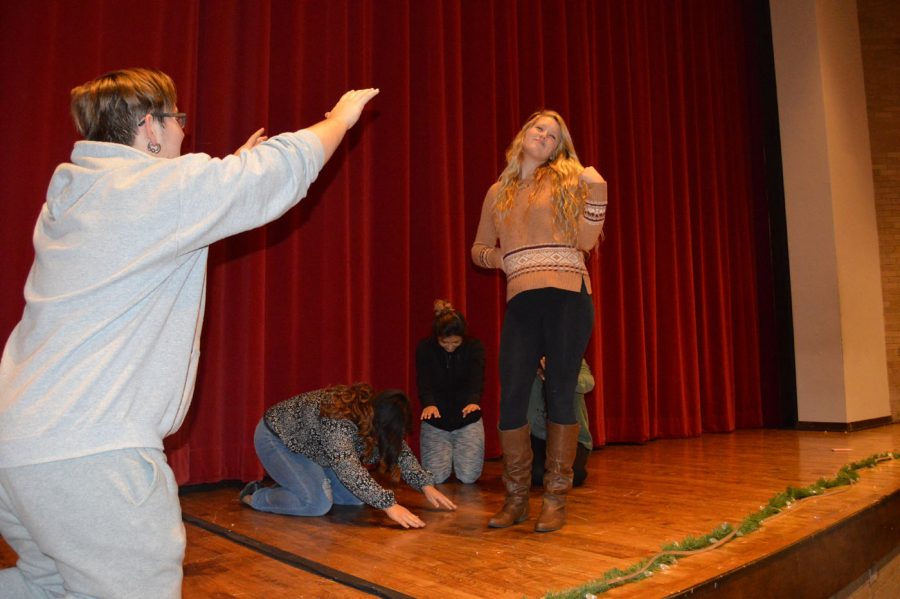 When Theater Director Lara Gridlock announced that this year’s winter musical would be “Paula Pan,” all SHS students, including everyone outside the theater department, knew exactly why so much energy would be exerted  for the second musical of the year. Three words: senior Paula Ruggs. Co-written by Gridlock and choir teacher Danielle Kody, “Paula Pan” was adapted from the more popularly know play, “Peter Pan” and was specifically written for Ruggs.

“We have a lot of great people on the team…I mean in the theater department,” Gridlock said. “All of my actors have improved so much over the years, but it’s clear that Paula was truly going somewhere with her acting career… so I created this show to help showcase her abilities.”

When initially casted, Ruggs said she was thrilled to be a part of a program that had helped her throughout her time at SHS. However, just two weeks after senior Paula Ruggs was casted as Paula in this years’ winter musical “Paula Pan,” Ruggs made the executive decision to transfer to Preliminary Offers for Box Office eXpectants, a private acting school in New York for theatrically talented students.

Upon hearing the news, many students, including sophomore and musical extra Ingrid Taylor, fell to the ground and started sobbing in utter shock. School was canceled for the next day and Taylor, who was used to bowing down to Ruggs at the end of rehearsal everyday, had to go to therapy for the one day that she did not see Ruggs.  She will most likely continue treatment after the musical when she has more time to devote to her recovery.

“I know the show would do okay without her. It’s just a little shocking that she would move after three years as a Cardinal,” Taylor said. “Plus, I’ll have to find another actor to worship, and I’m pretty picky, so it will be difficult.”

When Gridlock first heard that Ruggs was no longer going to be a part of a show that was created specifically for her, she admits having a negative outlook on the musical and her future as the theater director.

“I’ve always wanted to move to Mexico, and when I found out that Paula had moved, I honestly considered retiring right then and there,” Gridlock said. “I thought, ‘If Paula isn’t here, why should I be?’”

However, after crying for 1,929 minutes, a minute for each mile Ruggs traveled away from SHS, Gridlock realized that her theater department, the one she had helped build up since she began teaching at SHS, was about more than just one actor.

“Theater is magic,” Gridlock said. “Even the best of magicians don’t work alone, and this well-oiled, pit-lacking machine that I call the auditorium wouldn’t be a house to so many if every production we performed was a one-man show.”

Even though this plot twist has caused mental breakdowns and psychological episodes in students and parents all across the township, the theater program was able to work through what may at first seem like a setback with the help of Gridlock and Ruggs’ understudy.

For each lead role, there is a secret understudy that will take the place of the casted lead if he/she is unable to fulfill  her duties. No one, not even the understudy themself, knows who will fulfill the role if need be.

“It’s kind of like a designated survivor situation,” Gridlock said. “No one but me and Danielle know who the understudy is, and until this year, the only other time we needed an understudy to fulfill a lead role was during the production of “The Wizard of Oz” when Dorothy’s dog caught the flu. We didn’t have time to set up another show dog so we used one of the teacher’s’ cats. He was fat enough so I don’t think anyone noticed.”

Senior Mason Hickory, Ruggs’ understudy, believes that this change in attitude by Gridlock was one of the major reasons the show went so well and had so much success.

“People from near and far came to see our show on opening night last week,” Hickory said.  “I actually threw up in my mouth a little when the curtains opened and I saw how many people were in the crowd.”