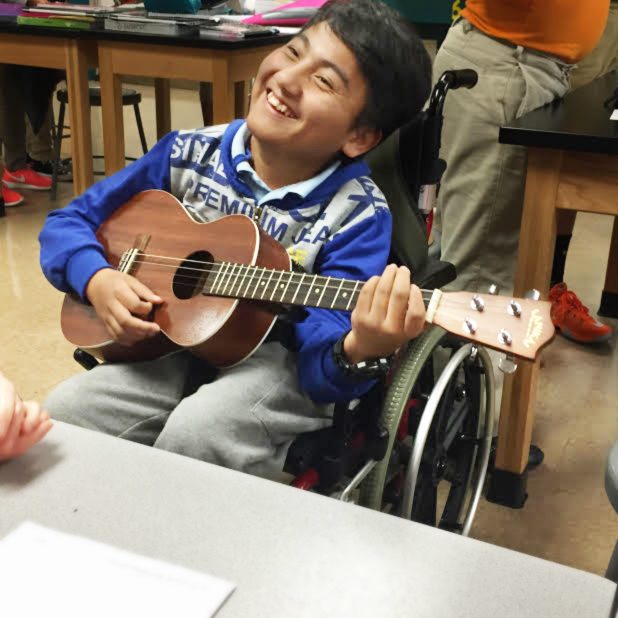 Freshman Kam Mang plays the guitar when he was a student at SMS. Mang passed away on Dec. 14 due to a degenerative nervous central disorder.

As faithful Christians, the family of freshman Kam Mang, including his brothers sophomore Zam Thian Mang and junior Lian Cin Hau, have valued prayer as they strive to remember the good times they shared with their late family member. Kam passed away on Dec. 14, 2016 due to a chronic degenerative nervous central disorder. Before his passing, and even now, Kam’s family has found peace by clinging to their faith.
Zam says his family continues to rely on prayer, as it has helped his family during this difficult time of loss.
“Praying is powerful,” Zam said. “If we pray and you believe it, you will see it.”
Zam says Kam’s lung condition made it hard for him to breath and caused symptoms similar to asthma.
Zam says that Kam’s condition didn’t stop him from doing anything his brothers did, however, after Kam’s eighth grade year, instead of physically attending SHS alongside his brothers, he was moved to a homebound program. Although Kam was technically an SHS student, he never physically attended classes inside the building.
Principal Brian Knight, who knows Kam from SMS, says Kam knew what it meant to be a Cardinal, even though he was at SHS for a short time.
“He was an amazing young man with a bright smile and a kind heart,” Knight wrote in an email to all SHS staff members.
Shortly before Kam passed away, he had the opportunity to be granted a wish by the Make a Wish Foundation, which helps thousands of fatally ill kids each year. Kam wished for one guitar and one drum set so he could play gospel music with his brothers.
Zam says his brother enjoyed playing his guitar, watching movies and listening to gospel music. However, what Kam enjoyed most was serving God and attending church at International Christian Assembly (ICA) every Sunday.
Zam asks that all who are able to keep himself and the rest of his family, especially his mother, in their prayers.