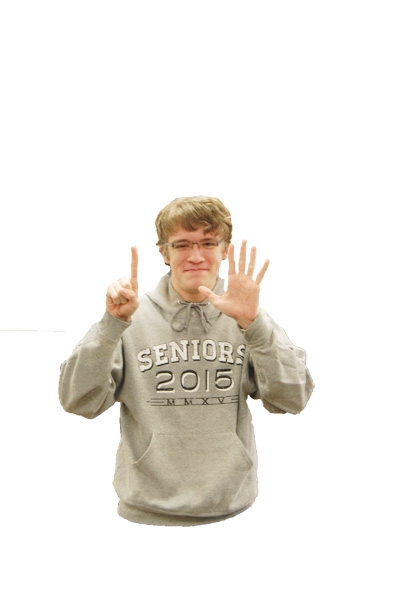 Recently, I’ve been craving a massive wardrobe overhaul. Having a hockey jersey for every day of the week simply hasn’t been doing it for me anymore. Curious as to what kind of style I should go for, I people-watched the halls of SHS for help. I’d committed to the cool-kid style of wearing shirts with random pictures of women on them paired with khaki pants, and I even had a shirt with Marilyn Monroe in a Lebron James Jersey in my Amazon shopping cart with full intention of buying it. However, my mom didn’t approve. What a shame.

Striking out with my first choice, I took to the hallways again to look for something else. After days of scouting, I found it. Stumbling around the hallways was a student in a “senior 2012” hoodie. I couldn’t believe my eyes. Here was a freshman swimming in a sibling’s $30 vocalization of being a senior and one year away from being free from high school, and I hadn’t thought to do it first. “That’s the most beautifully-hipster thing I’ve ever seen,” I remember thinking to myself. “That’s the one. That’s the look I’ve been searching for my whole life.”

I immediately took to Ebay in hopes to fill my closet chock-full of this hideously-hip attire. The first thing I managed to snag after an intense bidding battle with a user named “I’llWearYourGrandad’sClothes12” was a “senior 1999” hoodie. I couldn’t find sweatpants of the same year to match, so I settled with some from 1990 instead. I was also gifted a hoodie from 2015 to hold me over while I waited for the good stuff to arrive.

Once my packages arrived from Thailand after three long weeks, I could hardly contain myself. I wore the entire outfit proudly to school the next day. The amount of compliments I got were staggering. Only one person questioned the idea that I had been a senior during the same year that I was born. How could he be so stylistically uninformed? I gave that man a sigh and a hair flip and strutted away.

Littered in among the compliments, however, was stark criticism and many bad looks from people wearing the very same senior 2k-something hoodies that had inspired me from the beginning. I sensed a strong feeling of jealousy. Clearly, these fools were just mad that they were getting outclassed.

It only took about a month of me wearing my senior swag outfit once a week that I started noticing something. More and more people were adapting to the style. Worst of all, they were starting to rock it even better than me. Things were getting more and more vintage. I even saw someone rocking a “senior 1972” hat. Preferable to a “Make America Great Again” hat, but that’s besides the point.

Not one to be outdone, I knew I had to do something to be the king of the fake senior squad once again. I had to try something different.

I went to my nearest museum. On display there, in all its glory, was a “senior 1776” hoodie on display with other American memorabilia. The sight of it was so overwhelming that it brought tears to my eyes. I knew it had to be mine. A fresh $5 bill and a pack of spearmint gum was all it took to convince the museum guard to unlock the glass display and give it to me.

It, combined with the glasses that I had custom-made to say “senior” across the lenses, made the next day at school a real treat. You should’ve seen everyone’s faces when they saw me. . I heard multiple gasps as I walked down the hallways, and one girl wearing “senior 1952” sweatpants fainted at the sight of me. Needless to say, I don’t think anyone’s topping me again any time soon.