Student voices his opinion at the State House 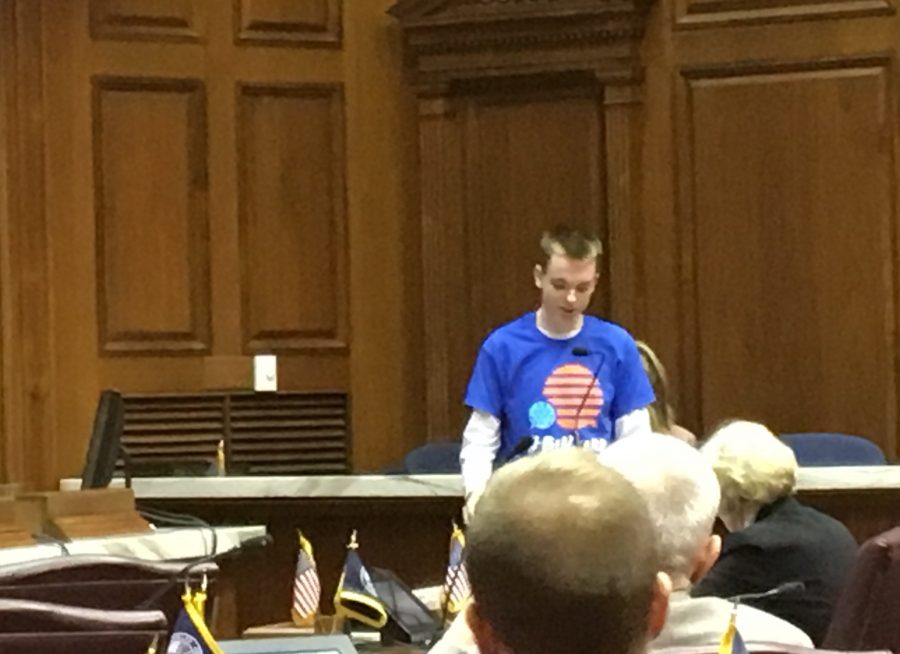 Junior Andrew Tapp speaks at the Indiana House of Representative Education Committee House on Feb. 14. He felt honored to be able to voice his opinion.

Junior Andrew Tapp stood in line to speak to the House Education Committee at the Indiana State House. In the audience sits other student journalists, the Committee and IHSPA director Diana Hadley who wants to support Tapp in his speech as well as the others who follow. As his name was announced to take the podium, he starts his speech, telling how he felt about student censorship in the media, using personal experiences as justification that students deserve uncensored news from their peers. According to Tapp, he was honored to have the opportunity to voice his opinion for students who couldn’t, left him with an experience he will not forget.

HB 1130 was the bill Tapp voiced his opinion on to encourage the Committee to pass onto the House. According to Indiana High School Press Association director Diana Hadley, it is “a legislation that allows student journalists to cover important issues related to their school and student body without being censored or punished.”  In the past, teachers have been fired from their jobs for permitting a student to publish an article that is not approved by the principal, if the school functions that way.

Amy Sorrell, who spoke after Tapp stated that she was a teacher in Indiana until a student published a column in the newspaper she advised. The column argued that people should treat others equally, even gays, and the school district decided to act against it by firing her. Sorrell had to be escorted by the police out of her school, and it was the last Indiana public school she taught at. She stayed in Indiana, however she is an advisor for a high school newspaper in Ohio.

Other states have passed similar bills, but State Representative Ed Clere led a group of journalism educators, high school and college students to review similar bills that have already been passed in other states. Then the group had to come up with a way to tailor the bill to fit Indiana and help it appeal to the Committee.

The bill had passed from the House and is going to go through the Senate Education Committee on Mar. 15 to see if it can pass onto the Senate. If it does, then it shall become law unless the governor vetoes it. Tapp will speak again in front of the Senate Committee, when only five are permitted to speak this time when last time it was opened to anyone who desired to voice their opinion.

The motivation for Tapp to try and speak at the House level was for the people who couldn’t: those who are faced with prior principal review of their publication.

“It was overall for the students who don’t get to practice free journalism like I get to at Southport,” Tapp said.