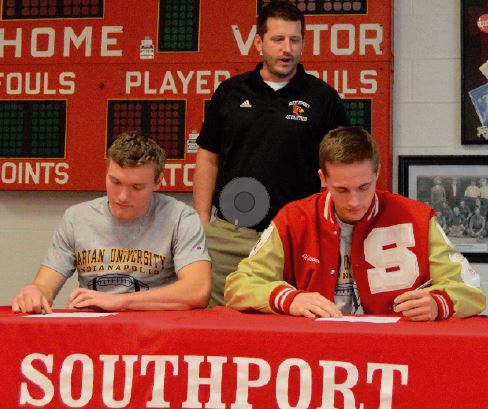 Seniors Andrew Mappes (left) and Hunter Hightower (right) sign their national letters of intent to play football at Marian University. They will join three other SHS alumni on the Marian football team next year.

When seniors Andrew Mappes and Hunter Hightower signed a letter of intent to play football at Marian University on Feb. 2, they followed the same path that seven former SHS students paved the way for. The path was created in 2012 when Kenneth Hawkins Jr. and Jimmie Walker Jr. went on to further their football and educational career at Marian.
“Once you get one good player they come, they have a great experience the odds are that you are going to have more,” Marian’s head football coach Mark Henninger said.
Henninger, who is heading into his fourth season as the head coach, has had an SHS graduate on every team he has coached at Marian. He says SHS has produced some great athletes and that he has a good relationship with the coaching staff at SHS. One of two up and coming SHS players, Mappes, says he is excited to
attend Marian.
“I think it will be huge playing with Luke (Johnston) and those guys again because I’ve played with them for so long and it should be great to play with them,” Mappes said.
Mappes says that being able to play with former Cardinals will be helpful. Because he knows how his teammates have played in the past, Mappes believes he will have an easier time integrating onto Marian’s team. He also said that the chemistry him and quarterback Johnston made when Johnston was at SHS will help because they will be able to trust each other and know what the other will do in certain situations. SHS head football coach Brandon Winters talked to Mappes and told him that it would help being able to know some of the players on
the team.
“Andrew had several opportunities to play, and Marian was one of them, and one of the things he liked was that we have had guys that have played there and have had a good experience (at Marian),” Winters said.
In the 11 years it has been in existence, the Marian football team has won two NAIA championships and have been runner up once. Mappes says Marian’s success did help with his decision since everyone wants to be on a team that can compete.
“I talked to all my coaches about if Marian was the right fit for me and how the program was,” Mappes said, “And I only heard good things
about Marian.”
He chose Marian over Air Force Academy, University of Indianapolis and a few other schools. Getting advice from his coaches helped because he was able to get pointed to the right school. One coach that gave Mappes some good advice
was Winters.
“The chemistry there (Marian) is very good. It is a very positive atmosphere,” Winters said.” It is very similar to what we have on our team (at SHS). So, I think that, as Andrew went to some of the visits, he could see that it is a smooth transition as far as the climate of the team and the culture of the team.”