Teachers and students take a stand against bathroom menaces 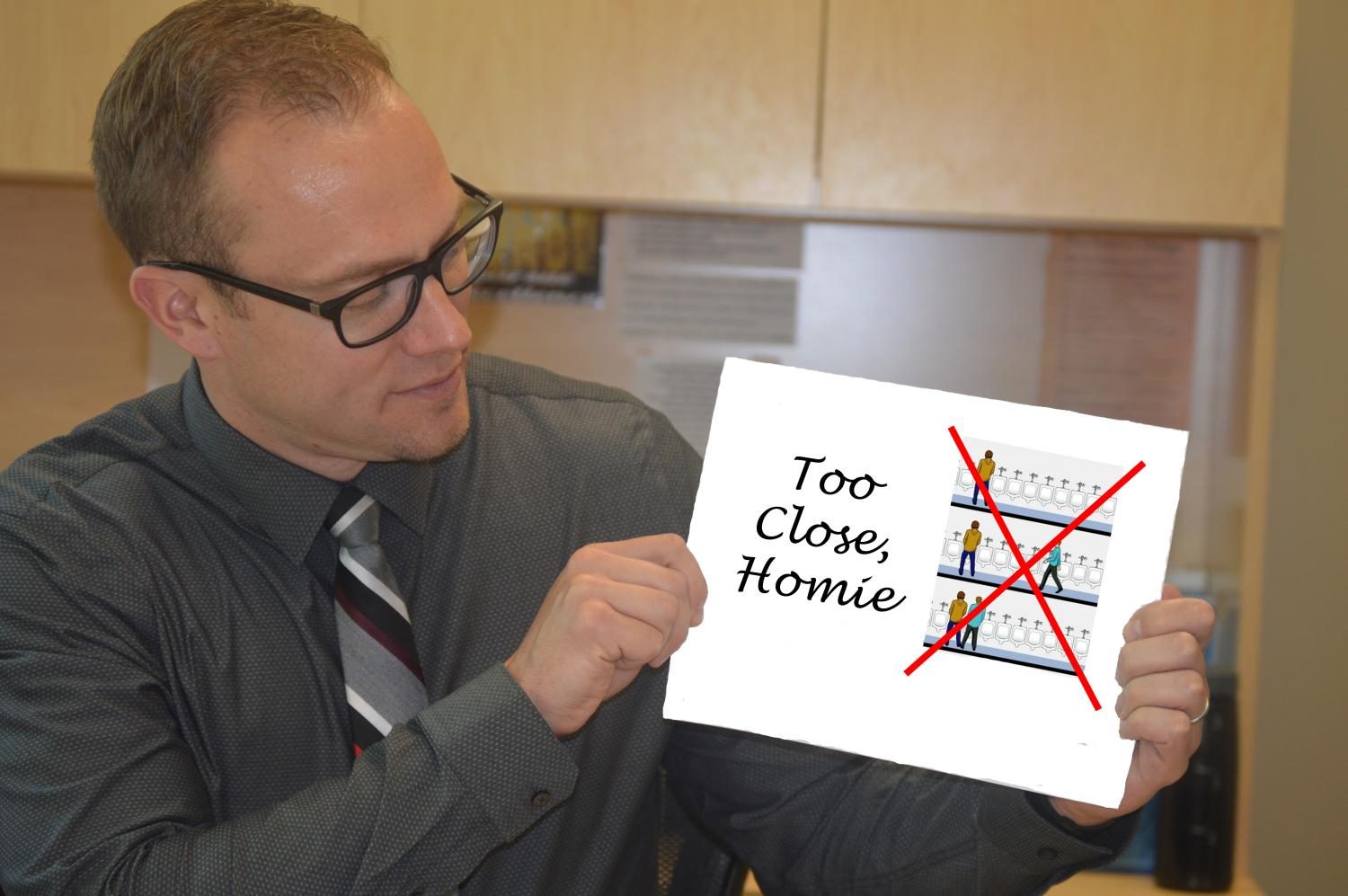 Principal Bryson Knit holds up the official “Too Close, Homie” legislation. “I was really impressed by the professional look of this almost-entirely student-crafted document,” Knit said.

After forgetting to use the restroom before first period and being forced to sit through a “brutal” round of ISTEP testing, sophomore Al Gador wasted no time making his way to the restroom. After choosing the end urinal closest to the wall, which Gador always does, his long-awaited trip to the restroom did not go according to plan.
“We are all civil people, I think. We all have common decency,” Gador said. “So, when there are five different urinals, why would anyone choose the urinal right next to mine? It’s just not right.”
According to a questionnaire which asked students to describe any incidents of another student urinating in the urinal next to them, Gador is not the first to have experienced this, and it seems like he certainly won’t be the last. Beyond the questionnaire, Gador and other students have voiced their frustrations to teachers who have taken the frustrations to administration. Chief among the teachers who are campaigning for a solution is English teacher Kayne Garu. However, according to students taught by Garu, a solution has been reached.
The new solution, called “Too Close, Homie” or TCH, was founded through the collective efforts of Gador, Garu and other administrators who wished to not be named. TCH, which becomes active next school year, has separate stages for each class level at SHS. For freshman, they will be required to take a mandatory one semester class on bathroom etiquette with primary focus on choosing urinals and stalls. Sophomores, which is the class level that appears to be the cause of most of the incidents, will also be required to take the class.
“Desperate times call for desperate measures,” Garu said. “I want things to go back to normal, and until that happens, we’re at war.”
Juniors and seniors will be what is called the “eyes and ears” of TCH. Administration has instructed all juniors and seniors to keep watch in the bathrooms during passing periods. If an underclassman chooses a urinal or stall directly next to another student, they are to be forcibly removed and brought down to the main office. If need be, juniors and seniors may drag the students there.
The administration is aware that some juniors and seniors are also causing the incidents. Administration has instructed students that if they are using the restroom and an upperclassman chooses the urinal or stall directly next to them, they are to say the words, “Too Close, Homie” at least once as fair warning.
If the perpetrator refuses to choose another urinal or stall, the witness student is to find the nearest teacher and report it immediately. Victims to the urinal etiquette crime will then be called down to the main office to describe the perpetrator to a random student taken from the SHS drawing class to construct a composite sketch.
There has been resistance to the TCH. Being a student-only resistance, it’s been officially called “Not My Bathroom Resistance” or NMBR. Founded originally on Facebook, the NMBR gained at least 50 students almost immediately after the page was founded. After putting up fliers throughout every hallway and bathroom of SHS, the resistance is continuing to grow. The leader, senior Buff Ahlow, has voiced his outrage through numerous Facebook posts and two rants uploaded to YouTube under the channel name, “Not My Bathroom, Homie.”
“If I or someone else wants to strike up a conversation in the bathroom, we should be able to,” Ahlow said. “If I can’t choose whatever urinal I want, what else will these tyrants start taking away from us?”
Despite the resistance growing in numbers, TCH will still be going in to effect next school year. Gador believes that if TCH doesn’t work, then nothing will work and SHS will have a serious problem on their hands.
“I’m just sad it came to this,” Gador said. “This isn’t the solution we deserve, but it’s the one we need.”